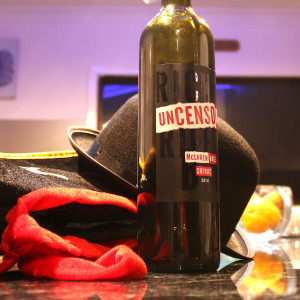 Given we had a cast of movie moguls in episode 129, we just had to bring you Uncensored Shiraz tasting notes.

In fact, this is the longest live wine tasting we’ve done because it spawned great conversation.

Firstly, we explored the ‘romantic’ notion of the the drunk writer or actor, which seems to be a meme within the movie world.

Mark explores, dismisses and then selectively accepts it, touching on points like using altered states of consciousness to connect with the divine!

Then the discussion turns to drinking and smoking in film and whether we could do away with smoking altogether.

Tess puts up some alternatives, Mark explains his views of the importance of smoking for certain period pieces and character interplay.

When we taste the wine and then turn to our sponor of the week, the theme of censorship grips us still as we look upon male and female nudity in film.

Mark was able to stress how there is a very definite point at which a penis becomes too much for the censor and even the act of love making has a certain limit in ‘cycles’ before a movie jumps from MA to R18+.

It’s actually quite an illuminating chat.

The wine itself was well accepted within the Bacchanalian nature of evening.

Descriptors such as smooth were used but we didn’t get much deeper than that, I’m afraid. We promise to have more boring guests in the future 😉

However, if you do pick up a bottle of this from Accolade Wines, it would be nicely accompanied by listening to the conversation it facilitated, starting about eight minutes in.