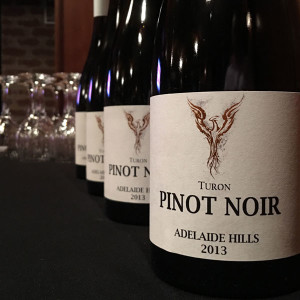 These 2013 Turon Wines Pinot Noir tasting notes are drawn from our live tasting in episode 131 at the Arkaba Hotel.

For the record, Pinot Noir always takes Nigel and Steve off the road more travelled and into less familiar territory, so they were on guard and ready for the experience. However, Ian and Becky Blake were instantly enticed because they are ‘Pinot people’.

Turon told us he was inspired to make this wine in his home region of the Adelaide Hills after spending the 2011 vintage working at Argyle and Roco winery in the Willamette Valley of Oregon USA.

While there he worked with 180 small fermenters of Pinot and hand plunged twice a day.

During this time he learned a lot of the nuances of Pinot Noir and a totally new way of winemaking.

Turon’s notes told us each vineyard was planted to different clones specifically chosen to respectively provide the structure and the flesh of the wine.

In the making process, Turon went for 15 per cent whole bunch fermented in each open fermenter and was then wild fermented before being basket pressed and then run to second and fourth use French oak for 18 months of maturation on lees.

The panel all agreed this wine requires some concentration to unravel and interpret; it is not one of those happy-go-lucky, big fruit guzzlers that Australia owns the rights to.

The first thing Steve noticed was how the wine is very dry and he said the first sip is like placing your mouth under a hand dryer.

To Steve, this sends the wine directly to the category of one that is perfect for pairing with cheese or suitable dishes, which is much more French than Australian in nature.

The panel noted there were layers of fruit deep down on the front palate and strong earthy tones, even some green stalkishness, on the back palate.

Becky and Steve also commented on how the wine opened up over the course of two hours, suggesting some breathing time or decanting would be an excellent ritual for approaching this Pinot, which is the South Australian Drink Of The Week.

You can hear the live tasting here, about six minutes in.