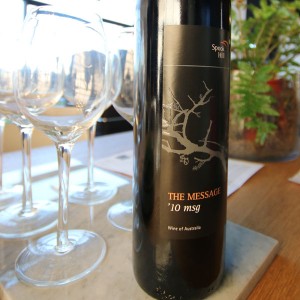 In episode 112, the team tasted a MSG made by Dave Gordon from Spook Hill Wines.

The thing that struck Steve the most was the aroma when the bottle was opened, it is a real ‘honker’ he said.

And once it’s breathed for a short while, the air clears and the palate is left to enjoy a soft, round wine.

In fact, Steve said the opening of a bottle of a 2010 The Message Mouvedre Shiraz Grenache, is much like watching a kids’ show like Lion King or Scooby Doo; there is an imposing silouhette of a beast that appears and is then revealed to be someone rather gentle.

Simon noted the ‘bigness’ of the flavour, prompting Steve to comment upon the layer of lucscious, sweet fruits.

Spook Hill Wines from Cadell seems to be producing some interesting wines and on the website you will see the Lesley-certified ‘funky’ bus that travels around doing wine tastings at hip events.

You can hear the official wine tasting here, about 6 minutes in:

And for some ‘spooky’ monsters being revealed, here’s Scooby Doo.