When the mirror bird sings

When The Mirror Bird Sings 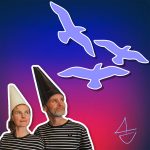 Children’s theatre is a hard gig these days with productions in the recent DreamBIG Festival raising the bar beyond that of much contemporary adult theatre.

Thus, companies like PaperBoats need to draw deeply from the well of imagination to create theatre on smaller budgets that will still “wow” their little and big audience members alike.

When The Mirror Bird Sings is a production that strives to do just that with lots of shiny gold and silver props, whimsical rolls of paper, strobe-like torches, ritual, and the endearing soundtrack of Vivaldi’s Four Seasons.

The story revolves around a king and queen whose kingdom is home to mysterious Mirror Birds until a bad season where the villagers are about to go hungry if they do not find an alternative means for supplying food and other necessities. In a flight of fancy, the Mirror Birds allow the king to sell their shiny silver eggs to raise money, thus triggering greed in the king who then locks up the birds as his geese laying golden eggs. The queen is not happy, resists, and ultimately the birds are freed and a nesting and incubation ceremony involving a number of children from the audience restores the bird population and we all live happily ever after.

There are joyous moments as the king and queen set up the story and demonstrate the habits of the birds. Slow, definite movements with each mirroring the other, creates a sense of order and harmony. Much creative use of simple, shiny props holds attention in the first two thirds of the show, with young audience members enthralled as they watch light and movement and story before them.

At one point, a young audience member was heard saying, wow, out loud, as rolls of paper shot across the floor in a darkened moment illuminated only by UV light. It was yet another moment of visual finesse.

However, the slow pace of the show, the long gaps in the dispassionate narration, and the extended ceremony to bring back the birds, did cost some attention and engagement among some of the children in the audience towards the end of the performance. Intriguingly, the director created a style of performance that was reserved and softly robotic at times. This seemed to create a little distance between the actors and their audience at times, as opposed to other children’s theatre which heartily draws children to the bosom of the production. Of course, this artistic decision did also conjure the aloof nature of royalty, and that was part of the DNA of the show.

Be that as it may, a special experience was certainly created and there will be images that young audience members will remember and wish to talk about, for some time after the show.