The Wizard Of Oz Arena Spectacular

The Wizard Of Oz Arena Spectacular 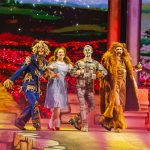 The Wizard Of Oz Arena Spectacular is the lovechild of Hollywood and PT Barnum. Hollywood brought us the black and white to colour transition in this tale about Dorothy, along with the goofy, animated house and cows swirling across the screen during the tornado scene, and Barnum brought us the lavish hype conjured by words like “spectacular”.

And this arena spectacular does honour both traditions in what can best be described as a spectacle.

This is not theatre (nor does it promise to be) because there is no mechanism for nuance in such a large, large arena, nor is there space for intimacy. Rather, this is more like a concert where performers take to the stage to step through their lines and actions with large gestures as they play out the story we all know and love.

And, thus, with our principals striving to fill the enormous space, it is with much joy and relief that we welcome the 500-strong cast of children who make numerous appearances as they swarm through the arena as munchkins, poppies, jitterbugs, Emerald City citizens, and so on.

When the young performers are on stage, the production finds its balance and delivers an experience of awe. No longer does the 9m high video screen dominate, instead it now complements the handsomely choreographed performers as the imbue the show with texture and elicit smiles from the audience as they do!

It would be remiss of me not to point out that one of those 500 was my daughter, Caitlin, who performed with an emerald-green sling (having sustained an injury during rehearsals). For a few moments with each new arrival of the masses, I confess my eyes did dart around to try to find her. But in those moments it quickly became clear that such a search was folly and a distraction from the experience, and so I relaxed and enjoyed the work of the young performers.

With some behind-the-scenes appreciation of the work done by choreographer, Callum Mansfield, the Harvest Rain team, and the many, many volunteer parents throughout the two-week rehearsal period, my enjoyment of the “spectacle” was surely enhanced. Callum and his team managed, yet again, to apply their positive and affirming culture to draw these young people out of their timidity and fear amid hundreds of strangers, and unite them into a community of performers. The success of this production with so many children is testament to the insight that treating children (and others) with trust, care, respect, and expectations of responsibility, tends to yield those same virtues in return.

This production remains true to the elements made famous in the film version with the added benefit that where the long sequences of little people tend to drag in the movie, they spring with new life in this production. Even for attendees with no bloodline involved on stage, the experience would surely be rare and rewarding.

The principals are all miked, otherwise you’d never hear them, and the tech crew was quick to replace Tin Man’s mic during the matinee performance when it rusted up and needed some fast oiling; all of which happened at lightning pace like a pit stop when he was off stage momentarily between scenes.

Carly Bettinson delivers an iconic rendering of Dorothy and her diminutive character is made to appear smaller and more lost, due to the large stage. That dynamic works well. Her version of the iconic song, Over The Rainbow, had slightly faster pacing than the original, most likely to meet old and young audiences half way. And soon into the show, set, music, lighting, and animation design, along with Carly’s physicality, all hit their straps early as she desperately tries to find refuge in the face of the approaching storm. For such a scene in such a large place to still trigger tears, is surely a spectacular feat.

With John Wood being John Wood as the Wizard, and ambling across the set as needed, the audience gets a little dose of celebrity. And hats off to the other cast members who bravely worked with children and animals (well, a dog puppet), namely, Chris Geoghegan as the Scarecrow, Michael Nunn as Tinman, Josh Whitten as Lion, Aurelie Roque as Glinda the Good Witch, and Bil Heit as the Wicked Witch of the West.

The Wizard Of Oz Arena Spectacular is truly theatre for the masses, in form and scale. And, similar to a large sporting event, the “fans” get to celebrate a blend of experienced performers and up-and-comers, and in this case will have left thinking there’s plenty of talent coming up through the ranks to entertain us for many more seasons still to come!

To paraphrase Dorothy trying to convince Scarecrow to see the Wizard: you should venture out to see the up and coming talent and the animated experience at one of these Harvest Rain arena shows; it might not be your idea of perfect theatre but you’ll be awe-inspired by the rare spectacle of mass ensembles so you won’t be any worse off.