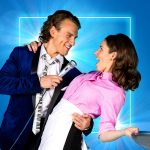 If ever a show was the perfect antidote to the blues, it’s The Wedding Singer.

This production draws upon all the bold, exuberant, and kitsch elements of the 80s, wraps them in pulsating music and song, and then flashdances away any heavy emotions you might be carrying.

Forget the movie, this musical stands on its own as a timeless story of boy runs a wedding band, boy gets jilted at the alter, boy turns sour, waitress who befriends boy is getting married to a “jerk off’, then boy and girl finally come to their senses and allow themselves to follow their hearts to each other.

Sure, there are some nuances and sub plotlines along the way, but that’s the gist of this show.

But the secret to enjoying this show is not the story, it’s the music, the choreography, the costumes, the cleverly minimalist but functional set, and the performances. This is a showcase of what humans can do when their mission is simply to entertain in the key of joy.

Director, Alister Smith, has woven some magic and delivered a show with no weak links. Period.

Our wedding singer, Robbie Hart (Christian Charisiou), is well played and traverses the emotional highs and lows of his plight with vibrant dexterity as if reading sheet music drawn by a composer on a rollercoaster. His love-to-be, Julia (Teagan Wouters), holds her own and takes us on a journey in which she matches Robbie’s intensity each step of the way, especially in the dumpster scene where the two of them have fully-charged moment of honesty and playfulness.

Teagan’s sojourner in waitressing and life, Holly (Nadia Komazec), is dynamic on every level. Known as a triple threat, Komazec rises to the occasion extolling a fourth string to her bow; singing, dancing, acting, and sexual power-wielding.

Band members, Sammy (Haydan Hawkins) and George (Ed Deganos) both bring formed characters to their roles and shine whenever the spotlight lets them.

Special mentions must go to Rosie (Susan-Ann Walker) who drew from every single one of her 30+ years on stage to own her moments and have the audience in stitches. Equally, Robbie’s ex, Linda (Kirby Burgess) has the moment, when abandoning Robbie at the alter, that blew the house down. It was a power rock chick number that pushed this critic’s star meter into solid 5 territory. And in yet more perfect casting, Julia’s love interest, Glen (Stephen Mahy), is the perfect 80s tossbag Wall Street type with his over-the-shoulder mobile phone, obnoxiously self-focussed attitude, and brazen coke habit.

Amid this production of saturated colours and big hair, the choreography needs special mention. Not only was it of-its-era, there were many times when the choreography was hilarious; a comedic tool well used to complement the stellar work of the cast and script.

For this reviewer, this show is not the usual fare consumed. But that compass of low art and high art has been completely scrambled by the professional onslaught of power performances (and shoulder pads and ties) in The Wedding Singer. Have I sold my soul? If I have, in the words of Glen, at least I’ve made a sale.

The Wedding Singer is a frenzied musical inspired and driven by an 80s quantity of coke! Highly recommended. Now we await the withdrawal symptoms.