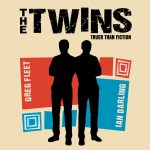 Greg Fleet, “the comedian who can act”, is back with a new play this Adelaide Fringe, “The Twins”.

It is a two-hander with Fleet’s Geelong Grammar school friend, Ian Darling, in which the two men recount the joys and tribulations of their lives, their friendship, and their inner journeys.

According to the “truer than fiction” storyline, these boys were thick as thieves on stage as schoolboys and both were planning to audition for NIDA with possible futures as actors stretching out before them.

But while Ian caved in to familial expectations (it just wouldn’t fit his wealthy family’s narrative) and self-doubt, Greg went ahead, only to be kicked out mid-course due to drug usage (a well documented aspect of his life which also runs through this story as a dominant theme).

On the barest of sets featuring a table, two copies of Shakespeare’s Comedy Of Errors, and a box of small props, these men spa and reflect for an hour as their play reading gets constantly sidetracked by recollections, challenges, and moments of warm friendship.

While there are some moments of confected grandiloquence (perhaps recreating some of their early drama teacher’s style) as they march back and forth across the stage or play air guitar to yet another few bars of a song from the 80s, this play is largely a rare and important glimpse into the inner world of men.

We might think that we primarily get “man stories” all the time due to white male privilege, but we don’t. What we usually get is male bravado and posturing. The Twins takes us behind the veil and into the swirling thoughtscape of imposter syndrome, anxiety, questioning, and vulnerability that still exists in even the most privileged of people; well, at least those who allow time for reflection.

And Fleet and Darling do just that. They think out loud throughout this play, either to each other or to the audience, and share candid glimpses into their inner worlds.

The script delivers lines to ponder, even though it isn’t eloquently Shakespearean. It’s more a rough hewn honesty akin to craft work created in a men’s shed with its direct and literal language only occasionally transcending to literary allusion.

The Twins is a grounded, honest work where instead of our actors dressing in other people’s clothes to tell lies, they dress as themselves and spin stories truer than fiction.