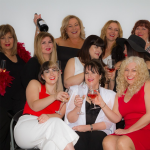 Framed around the group trying to plan a Fringe show without their director, each member discusses a song they want to sing or a skill they have to make their Fringe show stand out, and then performing said song or skill.

With a whole range of songs being featured, from Feel Like a Woman, to Bang Bang (My Baby Shot Me Down) and Bang Bang by Jessie J, Ariana Grande and Niki Minaj, to Despacito and Murder on the Dance Floor, to Piano Man, to songs by Bruno Mars and Eminem, and much more. Some were faithful and impressive recreations of the music, while others were fun parodies made to fit the choir.

Everyone had a chance to shine with their own solo and speaking lines. Even the audience, as they encouraged everyone to sing along for a few songs.

However, the microphone set up did mean this was hard to hear occasionally, especially some of the quieter speaking lines. Though most projected well enough that they could be heard over the music.

While the dialogue is a little kitsch-y, they look like they’re having fun on stage and they sang phenomenally. The occasional mature themes mean this show isn’t for the whole family, but it’s a great show filled with laughs and awesome music for a great night out with friends.