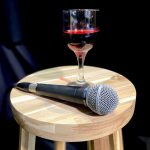 Available online via Fringetix, until March 21, 2021

One might say that comedy based on eternal truths is not novel, after all there is nothing new under the Sun, but there are few comedians who dive head first into the wisdom literature for source material like “David ‘Dave’ Davidson” (Anthony Noack).

In his Adelaide Fringe show, The Preacher, Noack as David takes us through the Book of Ecclesiastes, delivering its content as stand-up comedy material, recorded without an audience.

As a result, there is an awkward poignance about his performance and once we’ve settled in to the fact that his voice issues forth alone, we accept that his “punchlines” will be cast into the silent wind and fall about us.

His gentle, earnest, and self-deprecating style anchors this performance closer to theatre than comedy, which is perfect because, after all, as it says in the ancient text:

Laughter is madness. (And) what does pleasure actually accomplish?

David uses the text of Ecclesiastes interwoven with self-reflective schtick to set up the various passages.

While there are dollops of absurdity dotted in the hour, the whole show is performed in the key of reductio ad absurdum, which is very much in harmony with the original text.

Ecclesiastes is a book from the Torah (or Old Testament for Christians) in which the folly of life is pointed out and accepted.

It is considered a book of wisdom and it does seem that either it was profound in predicting the likes of Donald Trump, Xi Jinping, Boris Johnson, and Scott Morrison OR human societies just seem to go around in a cycle of thoughtless lunacy, when we hear passages like:

It is better to hear the soft-spoken words of a wise person than the rant of a tyrant in the company of fools.

There are laugh-out-loud moments in this show but for the most part there are searing insights into the human condition and the need to be wary of those who seek to control us; religious groups or otherwise.

If there is any glimmer of hope from this hour of bleak, philosophical insights, it is this: there are no misery clubs in society, but there are plenty of comedy clubs.

And, perhaps, if there were more comedians like Anthony Noack, comedy clubs would become the new centres of learning and life affirmation, rather than a refuge for fart jokes, fat jokes, and dick jokes.

This show is highly recommended for people who like dry comedy marinated in philosophy.