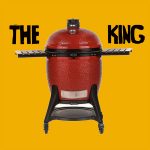 We’ve seen these stereotypes before, the silver-tongued, middle-aged salesman, the timid husband who feels downtrodden, and the domineering wife, but in the hands of local playwright, Jimmy Lyons, they are equipped with wit and laser-focussed dialogue.

The King is a simple play in two acts. Man is convinced to buy a barbecue beyond his means, then man strives to convince wife of the value of said purchase.

It is 50 minutes of comedic romp that never descends to farce. Instead, it straddles the low brow observations of men’s genitals being held captive by powerful women, and the high brow delights of word play and comedy under fire.

From the opening moments as Hank (Michael Eustice) strides across the stage preparing his barbecue showroom before setting his sights on hapless customer, Roger (Nigel Tripodi), we know we are in for a feast of sharp, delicious acting, even without firing up the majestic “King” barbecue.

Lyons has distilled the great showroom sales ploys after marinating them in the zestiest elements of “henpecked culture” he could imagine. We witness Hank deploying the divide and conquer technique, gradually wedging himself between Hank’s relationship and wallet.

Our conventional theatre eyes take a moment to adjust in act two, when we meet Roger’s older wife, Melissa (Sharon Malujlo). In a masterful stroke of casting, the disarming Malujlo “owns” her role and her “husband” in a way that maintains the suspension of disbelief achieved in the first act.

Watching these three actors perform with aplomb, will remain a joyous discovery of the 2020 Fringe. It is a masterclass in comic timing and had the appreciative audience queuing up for more, like hungry patrons at a barbecue cooking competition.

While there is much to say about leaving audiences wanting more, this reviewer felt cheated that Lyons had not pitted Melissa against Hank in some way. To see those characters go head to head could have brought an even more sumptuous closer than the one served up. But maybe that is for a reprise at a later date.

The King is fun theatre with all the gas burners of laughter set to high!