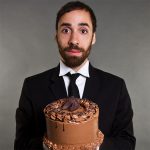 Death is the great finishing line in the race of life and here stands our late friend, Tomas, as the winner.

And, thus, one of Michael Burgos’ characters gets entangled in metaphors as one of six mourners delivering eulogies in The Eulogy, a parody of funeral speeches.

In a 60 minute performance including character work, mime, dance moves, crowd work, and even some singing, Burgos provides some moments of comic brilliance as he pokes fun at the elaborate hypocrisy and enforced best behaviour we all succumb to during funerals.

At times, Burgos’ characters display absurdist and/or grotesque elements, while at other times he delivers comedic narrative, with mourners letting home truths slip through their formal speeches.

Memorable moments include the opening rounds of mixed metaphors, the passive aggressive preacher, and the “close friend” who reveals how much the dearly departed despised his wife, leading to an hilarious vignette involving a jerry can.

On any other night, this performance would earn close to five stars but during last night’s performance, there was a strange atmosphere.

The weary Burgos apologised in his opening moments on stage, for us having to watch him do this performance that he’d done almost 200 times. He lamented that he was only doing it because Fringe director, Heather Croall, had more-or-less begged him to put it on. It was unclear in his opening remarks whether than meant this act was curated in an non-curated event, or whether he felt obliged after having a previously successful Adelaide Fringe season.

However, the cheeky and endearing performer then noted that his favourite part of the show is when he departs from the script. While such a device typically works well when used sparingly, Burgos broke the fourth wall and winked or acknowledged even the slightest chortle or reaction from audience members. This created a very fragmented experience, disrupting the flow of what is a masterful piece of nonsense and reflection.

Tonight is the final performance ever of this show and it would seem Burgos will feel greatly relieved of the burden.

However, it will mark the passing of what has surely been a much beloved performance piece around the world. May it rest in peace.