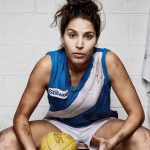 David Williamson’s satirical play about the broken politics behind the scenes of a famous football has been rebooted in the key of farce by the State Theatre Company and local theatre company, is this yours?

In fact, The Club works well as a boardroom farce because it shines even brighter lights on the jealously, pettiness, fear-mongering, sense of entitlement, and power plays that must surely be present in the halls of our local AFL powerhouses, Adelaide Crows and Port Adelaide.

And as many others have observed, the timing of this production coinciding with the women’s league, AFLW, being the talk of the town recently, makes this all-female three-hander a perfect vehicle for showing how universal the character traits (and flaws) of our protaganists truly are.

Male symbols of the moustache and some smarmy, penis-showcased posturing (not sure how else to describe some of the comedic poses adopted by the actors), combined with 70s “style” wigs and overblown, Graham Kenedy-esque ocker accents, create a blokey atmosphere, albeit one being mercilessly lampooned, in which our comedy unfolds.

In this clash of the stereotypes, or archetypes, we see the truth about many powerful institutions; it all boils down to personal conquests among leaders who use history, loyalty, and legacy as commodities to manipulate the hearts and minds of the faithful. Did someone mention Canberra?

What’s intriguing about having these iconic, male characters from Australian theatre played by women is to ponder whether we’ll see similar shenanigans play out within AFLW clubs or whether the excesses of cut throat bravado are, indeed, a male phenomenon.

Amid the elements of some clever set design (the besser brick backdrop was inspired), the device of having actors frenetically scrambling from suspended wig to suspended wig to assume different roles during scenes with more than three characters, was delightful for the most part but then bordered on distraction. This might have been deliberate, in the interest of achieving high farce, but at interval, one could have forgiven a football commentator for reflecting on the tight tussle between the script and the farsical devices with both sides poised evenly ahead of a promising second half.

And, indeed, it was a wonderful second act.

is this yours? pulled out all the stops as they evoked various gender forms and imagery as we approached the climax of the play.

The Club will leave you pondering deep questions about any organisation you are in, especially those that rely on membership for funding. As the characters make it clear, they strive to win premierships, not so much for the premiership itself but because winning the flag means attracting more members and that is where the money is.

In a rather meta way, could this production of The Club be a way for the State Theatre Company to provide some art for the punters, punters who might then become members?

In the words of every sports commentator who ever breathed; the girsl played well, they bonded as a unit and, in the end, the winner tonight was theatre itself.