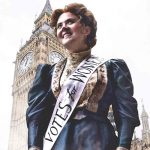 That Daring Australian Girl is a delightful play that is well elocuted and charts the story of women’s suffragist leader, Muriel Matters, in a polite, polished drawing room style.

Elocution lessons and recitals gave Muriel an avenue for earning money, leaving Adelaide and, ultimately, moving to London, so it is little wonder that Joanne Hartstone has created her Muriel as a figure perpetually poised for perfect, precise presentation.

The production is flawless. A thoughtful blending of elements helps create atmosphere and context, from silent movie-style projections to fog and colder lighting to place us in England.

The direction and design complement each other strongly, thanks to Nicholas Collett and Tom Kitney respectively, with a modest assemblance of props being put to ingenious use throughout the story.

In That Daring Australian Girl, we learn of Muriel Matters’ motivations and progress as she became one of the prime movers for women attaining the vote in Britain. There were false starts and happenstance, dogged effort, and periods of loneliness and longing. In the “proper” style of this play we don’t get to dwell as deeply in Muriel’s dark moments, which would have been fascinating, however, we are given front row seats to quite striking and creative acts such as dropping pamphlets from a small air ship to being chained to the grille inside Parliament House.

As noble and as idealistic as Muriel Matters is portrayed, her character does betray pragmatism. Her notoriety led to invitations to speak, including an Australiawide lecture series. Her acceptance of such an offer meant she was able to ride on the coat tails of public curiosity to further the cause.

Ultimately, the Muriel Matters portrayed in this production is one who has reflected on the value of art and taken the position that art should and can be used to speak truth to power. Muriel Matters is beyond the realm of “15 minutes of fame” and truly worthy of such stellar, encore productions as That Daring Australian Girl.