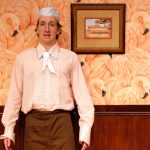 Table For Two? is an interesting mashup of ideas that is developing into an enjoyable meal but at the moment just needs to be popped back into the oven a little longer.

Will Tredinnick has developed a chaotic and claustrophobic restaurant scene in which to bumble around and startle his hapless diner, plucked from the audience.

In the Sydney Fringe Festival 2018, he won the NIDA Emerging Artist Award and there is good reason for this; this show IS emerging.

While there are some surprising and inspired scenes with the manager and chef characters, especially the latter, there is often an awkwardness with the waiter (beyond the comedic effect being sought) that allows some energy and focus to spill. In part, this might have been due to a small audience on opening night (always a tough gig) but it might be due to the waiter having to perform some slapstick routines that seemed more like first ideas from improv rather than gourmet reductions.

That said, there are some beautiful set ups in the narrative structure of this piece and with a little trimming and a touch more playfulness, this will do Will well for many years to come.

Table For Two? is what “the Fringe” is about; raw ideas and passion being give a chance to jump from the frying pan into the fire of new audiences.

The “Fringe curious” would do well to make a reservation.