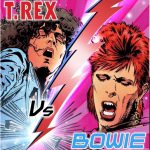 Back in September 2019, Steve interviewed Gary Turner, a musician who was obsessed by a dream of creating a live, authentic T.Rex tribute band and experience.

Fast forward to the 2020 Adelaide Fringe and we now have a show entitled, T.Rex vs David Bowie, in which Gary’s band T.Rexoz has joined forces with David Bowie tribute band, Ziggy Stardust, to transport audiences back to a time when music was gritty, experimental, and theatrical.

The key message of this show is that David Bowie and T.Rex lead singer Marc Bolan were good friends, despite years of press coverage suggesting otherwise. And the masterfully constructed set list for this show showcases the perfection of glam that these artists achieved.

Jamie Jewell is David Bowie in this show and is the only cast member to cycle through costume changes, as you’d expect from such a flamboyant character. Jewell shines in the role of Bowie, with a commanding stage presence that is at once a blend of nonchalance and exuberance.

On the Bowie side of the ledger, Changes was a revelation but Jean Genie was the moment when everything came together with flourish, aided and abetted by acoustic guitarist Will Reimer breaking out his harmonica to round out the sound of this iconic track.

For the T.Rex part of the equation, the fat, driving, catchy riffs were all there but when they launched into Children Of The Revolution, that is the moment when Gary Turner’s vision was realised. At this point, the dance floor filled and the energy in the “mature aged” audience shifted from one of reserved appreciation to active engagement. Unlike T.Rex in its heyday, there was more grey on the dance floor than black but everybody was entranced by the music and appreciative of the masterful musicianship.

An interesting moment summed up the difference between the careers of Bolan and Bowie. Bowie’s longer life (Bolan was tragically killed in a car accident at age 29) and commercial acceptance means many of us remember his songs and their titles, whereas Bolan’s legacy largely resides in tunes and lyrics. Noticeably, two women up dancing to a Bowie track looked at each other when Turner announced Hot Love as the next song. They both shrugged at each other to say I don’t know this, and turned to head back to their seats, only to hear the opening riff and do the fastest 180 to return to the dance floor in bliss.

On this opening night for the Fringe, the audio techs at The Jade couldn’t quite eradicate a prevalent hum that primarily affected the spoken moments. We are sure that will be cleared up for the rest of the run. In fact, we know Jamie Jewell will make sure of it!

Talking of Jewell, this show is a treasure in the glorious way it shines a fresh light on the golden riffs and charisma these artists created for the world.

Send a Telegram, Sam, and get your friends together to bask in the Golden Years of music when these Heroes Banged A Gong with passion, melody, and originality.