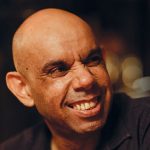 Bigger and Blacker is destined to be one of the most important shows in the Adelaide Cabaret Festival.

Steve Oliver, star of Black Comedy, uses the stage in this classic cabaret show to titillate us with some “naughty” and fun songs based on his sexual appetite and identity, interwoven with stories, song, and poetry that takes us deep into his journey as a gay aboriginal man aka a minority within a minority.

Steven is candid about the arc of his career and personal well being in this show, ultimately encouraging all of us to not just ask others, are you okay, but to ask ourselves this question. For him, this is a crucial task in a society in which the great “connecting” saturation of apps like Facebook are actually deceptively shallow and fostering a world of disconnectedness.

And this is just part of the territory which makes Steven’s show so important.

Through the sharing of his story, we gain an honest, earnest take on what it can mean to be an aboriginal person living in Australia. One of his most arresting thoughts is his recounting of the “gay marriage” scene in Black Comedy series two. Upon reflection, Steven realised that not only was that scene the first gay aboriginal marriage on Australian television, it was possibly the first aboriginal marriage. If this is true, this really does illuminate a blind spot in our culture and begs the question, is our media landscape in this country one in which all citizens can see themselves, reflect upon their identity, and develop a sense of “home”?

Steven’s cheeky, wink-at-the-audience demeanour and his light-hearted way of couching his deep messages as low cost cultural awareness training is powerfully disarming. Even some audience members who appeared to be the most hardened, arm-folded, resistant participants, could not help but be softened and invited into this very rare and very important communion of fellow Aussies; a place of fragility and truth.

The topic of fame is covered along with the observation of how it’s not so much the artist who changes but those around them. Some of Steven’s “friends” were oblivious to his despair during his journey and remained focussed on what he could do for them, while others remained steadfast. On the back of this (no, not like that, Steven), he brings his poetry and songwriting to the fore to remind us and urge us to never shut ourselves away from the good people in our lives, even though our brains are wired to give a lot of time and focus to the poisonous, negative actors in our lives.

If this sounds like a heavy show, it is and it should be. This show cuts through the dross of social media, mass media, and, dare I say it, the glib sugar hits of sketch comedy, with an urgent call to arms, that is, to open our arms to embrace ourselves and those around us who are there to share our lives with us.

But it is also a show with fun and smut and puns, in what is a masterclass of how to create holistic entertainment. In some ways, Steven’s achievement is like that of William Shakespeare who was able to write plays that would entertain the learned nobles and the lewd loud people in the pit at one time. But a better illustration would be that this impressive Australian has drawn upon his aboriginal culture’s dreaming and storytelling heritage to create “a beautiful inclusion” for the Adelaide Cabaret Festival and, I hope, for Australian audiences nationwide.

We need more voices like Steven’s, ones who might also appear initially as “the clown” but who can then take us to the heart.

There are hat tips to Jessica Mauboy and Whitney Houston and a number of Peter Allen-esque embellishments on stage as Steven’s music spans a number of genres from the glitzy and glam pop style to the rapid fire rap and beat poetry style. All of these elements are sublimely crafted into a complete story arc and showcased perfectly through his musical director and accompanist, Michael Griffiths.

As Steven Oliver says in one of his poems, it’s not that I condone violence, I just don’t condone silence. In Bigger and Blacker, Steven has spoken. For those of us who care about our community and society, let us hear.