See The Big Man Cry: The Life And Music Of Drought Turgid 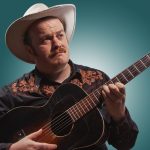 Cabaret comes in all shapes and sizes and with See The Big Man Cry it comes in Country AND Western.

We hear how this little-known country singer has had a number of “ones” (not “hits”, due to legal reasons), and has done his best to capture stories of life through the medium of music, particularly country music.

There are some very clever passages and lines in this show that will reward the nimble-minded.

There are also some very pleasing and clever songs that would have potential for being played on country music radio stations, without needing any reference to this show.

Drought’s 3-piece band performs tightly and creates the atmosphere and sound one would expect.

Drought’s drummer, Brad Bread (Antoine Jelk), plays the foil to Drought’s stories and jokes and even takes over the stage at one point when Drought disappears to take an important phone call.

This show has legs and it will be good to see it polished further so that the performance matches the jewels in the writing.

Perhaps deliberately, this show feels a little slung together like Drought’s fixed it with some fencing wire. There are some clunky cues, a little too much reliance on ads from the Bugalong Commercial Club, and the concept of having pokies room sound leaking through the background became irksome and distracting.

But those few elements aside, this is good, creative, and, at times, absurdist, cabaret in the key of country and worth checking out if you’d like to take Kenny Rogers’ advice in The Gambler; you gotta know when to laugh along, and know when to just let things be a little loose for a while! By the end of the night, though, you should have broken even.