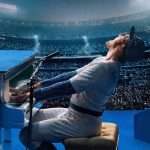 Rocket Man is a gritty and glittery telling of a story about Elton John that touches on other themes common in the stories of megastars but does it, for the most part, in an enthralling and entertaining way.

First up, let’s note that Rocket Man is not a documentary and never tries to be. It is a story about a man who creates a new persona to achieve fulfillment, and succeeds although his success comes at a price.

The storytelling sweeps majestically from anecdote to anecdote, scene to scene, in much the way an on-stage Elton might sweep his bejewelled arms around and transport us from one mood to another.

While most of the narrative is anchored in a rehab session, we dart between home life, offices, pubs, stages, parties, and mansions as the film charts personal and professional milestones of Reginald Dwight’s transformation into Elton John.

This poetic and musical-like approach to storytelling is sure to disappoint some viewers but those who allow themselves to loosen the grip on expectations of an historically-accurate biopic, while be in for a magical journey along one man’s yellow brick road.

Towards the end, after Elton’s second “crash”, there is a sense the story is petering out but then Bernie Taupin hands Elton some new lyrics to put music to and the seeds of a renaissance for Elton’s grandiose spirit are sown and the world hears the 80s anthem, I’m Still Standing.

Secondly, there is a refreshing amount of grit in this film.

Early in the story, there are some profound and telling moments hinting at the rough road ahead.

Reginald Dwight is given advice from a fellow performer that if he wants to create and become a new person, he needs to kill his old self.

And thus, an existential journey begins.

Refreshingly, for these glammy biopics, Elton is not always the shiny hero but is portrayed as a flawed character held back by neglect from his dad, buoyed by strokes of luck such as a music scholarship, and drawn in by the “safe” sanctuary of drugs, alcohol, and sex.

We are also granted front row seats to his struggle to come to terms with his homosexuality, giving us a sense of a man being trapped by the expectations of his larger-than-life status.

But then, with the struggle struggled and a brighter chapter opening, we get a heavy-handed serving of pious facts about Elton John’s newfound status as a wealthy benefactor.

These facts are so out of place in what was a “make your own mind up” story, that one suspects someone (hmm, Elton was one of the producers) told someone to make sure Elton comes out of this looking good. Instead, there is a fleeting feeling that we’ve all just be sold something.

I’d like to think a director’s cut would remove this bitter tasting two minutes from what was otherwise a joyfully mesmerising piece of musical cinema.

Please take a bow, Taron Egerton. You gave us an enjoyable ride on your big dipper!