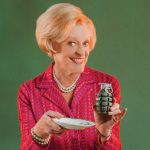 Re-emerging from the fog of Covid-19 restrictions like a skydiver coming into view as they plummet through clouds, Ripcord by the State Theatre Company of SA is back on stage and the theatre world is hoping this season will now achieve a safe landing.

And what a piece of theatre this is, at the end of one of the most torrid years in our modern history. Ripcord, by David Lindsay-Abaire, is a pastiche of theatre and comedy styles, focussed on the antagonistic relationship between two women sharing one room in a nursing home.

Abby (Nancye Hayes) is the uptight, particular, and sometimes mean-spirited roommate whose emotional state is rankled by the effervescent, bright-as-a-daisy optimism of Marilyn (Carmel Johnson). Abby has the bed by the window overlooking the park and has come to enjoy the solitude of having the room to herself. Marilyn’s larger-than-life, saccharin-sweet demeanour instantly puts Abby on edge and after a time the two agree to a bet. If Abby can make Marilyn angry (something she seems to be immune from), then Marilyn will leave the room. If Marilyn can make Abby feel fear (something she seems to be immune from), then they will swap beds so that Marilyn has “the view”.

But this is no drawing room farce. Although there are farcical moments in this play (many, in fact), it is part comedy, part drama, and part realism, with dashes of slapstick and absurdity. In many ways, this is like The Odd Couple with elderly female characters; Abby says the food is tasteless, Marilyn loves every mouthful, Marilyn thinks the company of other residents brings joy, Abby shuns such involvement.

To watch Ripcord is to freefall through a mix of styles and energy levels, one moment laughing, another moment listening in on some earnest dialogue, the whole while realising that you are moving towards an inevitable end. And Mitchell Butel’s direction has amplified the patchwork nature of the script by having Abby’s character stiffly pressed and very much the fish out of water when compared to the more crumpled, rounders characterisation of Scotty and Marilyn. Furthermore, Colleen and Derek often perform at hysterical levels, volume on 10 with no modulation, as if Butel was deliberately fuelling them up to contrast the deathly quiet, still as a morgue seen when Abby’s son, Benjamin (Nathan Page) appears. This scene, again, feels like it has been grafted from a different play, such is the deft gear changing employed in this production.

Adding to the wild array of experiences delivered by Ripcord, is the set and lighting design. From the moment the curtain raises (fully), we are drawn into the world of this nursing home. The full stage is used with just the right degree of decoration and furniture, to conjure the sense of a twin room, accentuated to perfection by the masterful window overlooking the garden complete with perfectly match sunlight at times through the play. Then, shifting gears again, the carousel stage reveals a cartoon-like haunted house set for one scene, then a candy-like skydiving plane for another; both with bold colours and loud flourishes of design.

Amid the many golden moments in this production is the quirky, absurdist scene when a “robber” in a grotesque rabbit mask warns his “victim” to act normal so as not to draw attention. In this moment, the production touches the Sun as far as its quest to taunt “suspension of disbelief” and fully embrace the spirit of “play”, of “fun”. Lindsay-Abaire and Butel both seem to relish this aspect of theatre, channelling Shakespeare’s Bottom! However, I am not sure that last sentence came out the way I had intended it to!

Ultimately, this play is the perfect fit for a night out when you are searching for an antidote to the grim seriousness we have all had to endure this year. If you can enter the theatre in a playful mood, you will be richly rewarded. There is some very sharp writing in this play, and some equally sharp barbs delivered by Nancye Hayes’s Abby, made all the more rewarding when the “ripcord” is pulled and our hearts can again find comfort in being reminded we are social creatures who find succour and safety when we are truly vulnerable in our relationships with others.

At a time when social discourse has fractured into the hurling of poison between people on the far left and far right, along with a lack of charity in striving to cope with people whose habits annoy our sensibilities, Ripcord shows us that our brittle armour of snide bitterness used to repel and belittle people “not like us” is nothing more than artifice; a mere, short-sighted mechanism using lazy slogans of ridicule to relieve us of the hard work of dwelling with others and working together to create a new narrative of being.