Rhino Room Late Show: How did Fleety get back into SA? 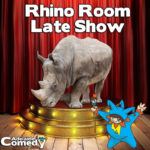 No idea how Fleety got back into SA. I’m pretty sure we, as in The Adelaide Show, shut down his visa a few years ago but there he was. Emcee. He promptly set up a great laid back atmosphere, which was useful because this show gave Return of the King a run for its money when it comes to duration.

James McCann opened up, the love child of Harry Potter and Ron, post puberty with beard. Straight into the non-PC side of life with hilarious results and with the backing of 2016 Adelaide comedian of the year. Well put together, fast paced and witty. I never saw his earlier work, it did take a while to find the current James because it would appear his humour has come a long way. Or maybe Melbourne just kills all creativity? Judge him by his new work and its well worth a visit.

Merrick Watts was up next with guides to surviving Colonades and the central market. Great Adelaide humour and the *best* Adelaide driving rant ever. I know Steve will disagree with me here but seriously Adelaide, please get your shit together when it comes to roads. Merrick explains in detail hilarious detail if it really isn’t clear by now.

Joel Creasy. Well, as someone who doesn’t watch TV I was wondering how much of the stories I would get. My fears were unfounded as a hilarious show ensured. How he survived that ordeal is still a mystery, however I have a feeling his sense of humour was needed in spades. His passionate reflection of a gay life was entertaining and that typical Aussie self-deprecating humour shone through. Seeing the funny side of life and not taking himself seriously were a genuine and entertaining mix.

Akmal Saleh. Crowd interaction is in, political correctness out. Yet again the lack TV and even basic knowledge of entertainment allowed me to enjoy Akmal with virgin eyes. With hindsight, I think virgins were mentioned too. His highly energetic show was great comedy, easily relatable and appealing to many and not at all pretentious. If life really is just a crazy reality show, then seeing a dose of Akmal will surely help you cope.

What came next came only be described as a yellow dervish, a whirlwind of physical funny. Tessa Waters flew onto the stage and soon had the audience in stitches and in some cases, physically contorted on stage. Her style of visual and very physical funny was hilarious and fast paced and left you wondering if a tornado had just blown through the Rhino Room. With very few words and an audience more than happy to get involved she was a great change to the pace of the night.

Finn Taylor finished off the long night with a very British middle class view of the world, in some ways reminiscent of the great Cleese and Python however far, far more un-PC. With topics ranging over sex, vegans, Jews, slavery and seafood he sailed very close to the wind at times but maintained a fast paced and forward progress. The audience lost it many times, I’m sure exhaustion was setting in and many were close to having asthmatic attacks with roads Finn led us down. All in all, a jolly good laugh.

In summary places like the Rhino room are simply great to see a range of fantastic comedians. The format lends itself to being exposed to a great range of talent, local interstate and overseas.