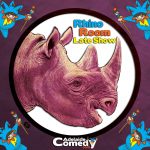 The show started out fast with the MC for the evening being the hilarious Lindsay Webb. I think the Late Show must be one of the longest shows of the Fringe and the MC is drawing the short straw however Lindsay powered on through the show without skipping a beat so that deserves an extra round of applause from the get go.

Bart Freebairn was the first act on and was fast out of the blocks. Clearing up for all the meaning a ‘lose unit’ and what is exactly the best food to sneak into a movie? His presentation was great, a sort of a laid back style with clever punch lines.

Richard Stubbs was on next, starting with witty observations of the benefits of Taxis over Uber. Another hilarious laid back sort of approach with observations from zips on dresses to sneaky rooting in the pre Millennial days. It’s amazing to see someone with over 35 years in the comedy scene going strong, anecdotal comedy still pulling in the laughs.

Third up for a surprise was Tom Gleeson. And that is one of the cool aspects of the Late Shows at the Rhino, you’ll never know who you get. Without the commercial front end Tom could unleash a lot more funny lines. As an out-of-towner he pirouetted on the ‘City of Churches’ and the drinking problem WE DON’T HAVE. Politics came galumphing into the discussion with rather cutting comments well received by the entire crowd. Evidently NLP members don’t have a sense of humour nor go to Fringe shows based on our crowd. However another name for member is tool so this isn’t surprising. Tom was very funnier without the constraints of early evening TV’s sense of niceness.

After the break Becky Lucas followed up. Energetic and fast , Becky led us through a whole of twists on observations of life. As a millennial, living the life through the clutter of dick picks, expectations and self-deprecating humour the crowd was pretty happy with her show.

Dane Simpson followed with a view from the Wagga side of the country. Growing up in the country with authentic culture and experience Dane could draw upon his life for his comedy, From fritz to a didge tune Dane had a good reception and drew the laughs from the crowd.

Michelle Brasier, also from Wagga Wagga came after with a few observations on the catholic church. She also put on a pretty good show as one of the lesser known peeps of the evening.

Tail end Charlie ended being Jimmy McGhie, which I think was the highlight of the night. English and funny in the old school English style. With cutting edge humour he got stuck into the Millennials and their phones. Land lines vs. snapchat. And also covered off on the three most important things in life, property, babies and fitness. Jimmy had the crowd in stitches.

The Late Show at the Rhino room can be well recommended as an excellent show.