Red Dress and the Sugar Man 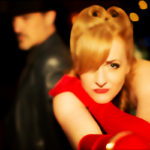 Let’s deal with formalities first. South Australia, if you enjoy the music and poetry of Tom Waits, consider it rude NOT to buy some of the last tickets to experience Red Dress and the Sugar Man at the Adelaide Fringe.

This is not a tribute show, this is an immersion show; an immersion into the beat-noir style of poetry best described as Waitspeare.

Tom Waits’ dark, disarming, dystopian stories and characters, are fleshed out in the earnest, performance poetry of Marisa Quigley, as she guides us from song to song like a late night taxi driver dodging traffic and changing lanes to beat the lights. But unlike that taxi driver, she’s not looking for shortcuts, she’s enjoying the drive, every single curve, and she wants us to see her Waitsian world through her eyes.

Marisa has teased out the characters of Rosie and Romeo and takes us deeper into their worlds, partly by poetry and mainly by conscripting various Waits songs into service to create the world of desire, doubt, temptation, and desperation in which our characters dwell.

Imagine Tom Waits at his bluesy best. Then step beyond your imagination as Marisa Quigley, former female blues vocalist of the year, takes the wheel and drives you downtown, down, downtown. As her voice spills her charms and most surely sets off all the burglar alarms along Grote Street, you will experience such a pure dose of Tom Waits you’ll think you’ve taken all the drugs he sings about in his songs.

But if you think high that sounds dangerous, we had the exotic pleasure of being held in the gaze of Marisa’s vocal angels, Priscilla Jane Armstrong and Bella Jeanne Rafaell. Priscilla has the most dangerous eyes to ever take the stage, at once you are pinned in your place by their power while also feeling irresistibly and ferociously drawn to them. Bella, meanwhile, is the perfect foil to Marisa’s dominating stage presence; her submissive demeanour lures your gaze while she summons unexpected power to meet and match Marisa in full voice.

And the band, Rudi Katterl on guitar, Chris Mangan on double bass and keys, and Adelaide beatmaster, Sam Marshall (who is also Marisa’s cousin), drench the temple street gloom of La Boheme with tight, masterful and powerful blues. Their entrance is also worthy of a mention. As Tom Waits plays on the PA, a few minutes before starting time, these men gradually take to the stage, position themselves with their instruments, and then pick and poke at the song being played, ultimately submerging it in live, powerful accompaniment. And the show is away …

Prepare yourself for this show, like you are visiting a certain kind of spa on a seedy side of town for some forbidden indecencies. Take a glass of Chivas Regal, hide yourself in the shadows and fall in love with Tom Waits all over again.