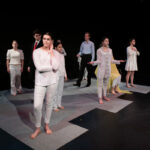 At the Holden Street Theatres, wedged between the sweeping, international perspectives of Henry Naylor and the nostalgic promenade of Peter Goers, Wings2Fly Theatre quietly presented an engaging production of Property Rites, which prodded our imaginations into action and played with some philosophical conundra.

The story centres on Kyle MacManus (Byron Jeffery), an entrepreneur who has invested millions of dollars in a high-tech collection of human “sculptures”; these 10 figures are lifelike and with a simple control panel they can be made to deliver speeches, hold conversations, even interact with telephony and be a Siri-like interface for incoming calls. When we first meet MacManus, he is trying to sell his installation of humanoids to investor, Rudy Pushtin (James Walters), his puppet master mother, Gladys Pushtin (Milly Grainger), and the hapless son, Mike Pushtin (Zach Haarsma). The deal is almost clinched when a malfunctioned “figure” (Savannah Guthrie) reacts to Mike’s untoward advances and clamps her mouth down on his finger. It betrays a flaw in the system and the deal is off. When repair people (Harriet Wolff and Joshua Elford) arrive to service the figures, the bleak state of repair is revealed and Kyle is faced with a dilemma about how to reclaim the money he’s invested in a flawed project. Could an uprising by one of the figures (Ashlee Scott) wrest control from the failing entrepreneur, or will drastic violence provide a lucrative exit for him?

Satisfyingly, there are deep and sometimes dark themes in this play or, at least, hinted at. For example, there is a chilling moment when Rudy opines about just how flesh-like the artificial skin is. Walters delivers this questioning with Jeffrey Epstein-like calculating curiosity. Similarly, when Kyle threatens to employ a macabre ending to his “problems”, the audience is drawn closer in shock; such is the believability that Jeffery brings to this passage of the play. Not your typical “youth theatre” fare?!

On that note, Michelle Nightingale has taken a deft stance with her direction of this play; stamping authority over the experience and signalling to the audience that real theatre is in session. The opening moments, when the set emerges from darkness and becomes filled from left to right, from up to down, with stationary, white-clad “figures, we are privy to good, classic, theatre-of-contrasts. And her direction never backs down from this bold stance throughout the show, rightfully outstaring any theatregoer who dares to relate Wings2Fly with conventional notions of “youth theatre”. And the players met the challenge.

The physicality of the figures is constant and is the foundation upon which our suspension of disbelief is built. The vacant stares, the snappy reactions, the stilted, robotic movements, are all done with aplomb; not too much, and never too casually. There are little signs of focus during every minute of this production, from perfect moments of robotics-in-unison to little details like the snapping heads when Scott’s figure implores other figures individually to break free.

Amid a strongly ensemble performance, special mention should go to Guthrie’s moments when her mysteriously quiet brooding is sparked into fast, strong action in interplay with both Scott and Jeffery. Of course, this highlight would have been lost had not every figure kept its focus and kept the conceit alive.

Sprinkled with laughs and moments of relief, this Wings2Fly production of Property Rites was satisfying to watch and to experience; there is a constant mood ratchetting up and down throughout like a opera phantom’s manic chord playing.