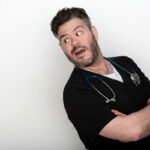 Dr Lane Hinchcliffe is a GP, composer, and performer, based here in Adelaide (much to his earlier chagrin) and this show, Prepping For Theatre, charts his life from a young, gay boy discovering musical theatre, his calling as a doctor, Adelaide, and himself.

It is a show that is both purely delightful for fans of musical theatre (some classics preserved and some classics seconded) and one of deep, emotional travail.

Taking a leaf from the good doctor’s book, let’s take the role of Sophia Loren from her comedic hit single with Peter Sellers, Goodness Gracious Me:

It’s cathartic, taking a standard and repurposing it, and Dr Lane does that in a measured one in this one-hour, cabaret, tour-de-force.

At the risk of Dr Lane snubbing this review, I declare his choice of The Music Of The Night as one of his opening numbers, around which he weaves some important, emotional compass points for his story, is inspired because unlike its appearance in Phantom Of The Opera, where it is one of only two worthy songs amid much fluffery and stuffing, here it realises its full potential of gravitas and poignancy.

From this point on, we are like patients of old who held GPs in high esteem (before Google taught them more about medicine than their doctors). We are present in awe; every song choice, every narrative, is honed in a way you would expect from a 16-year veteran of the Fringe who is working with Joanne Hartstone and Tom Kitney.

To that point, the camera direction is first class, helping this one-man show transfix us on our home screens.

There are some very fun moments like his sneering inclusion of “Adelaide” in his requisition of Chicago‘s Cell Block Tango, and some achingly beautiful and heart-wrenching moment such as his weaving of story around Jesus Christ Superstar‘s Gethsemane.

Dr Lane has achieved something rare. He has produced a show with a strong community education message that is equally of perfect entertainment value. Usually one dominates the other.

If you have any family members even slightly inclined towards musical theatre, this show is an important one to buy and watch at home. It is rated PG and our 13yo stayed for the journey and was entranced.

Prepping For Theatre is important, fun, and life-giving cabaret, and amid shows of vulgarity and titillation it is just what the doctor ordered!