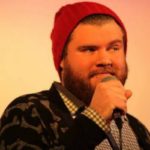 There’s a good person in there, truly, there is. It’s just that Patrick Carl has to exorcise a LOT of profane demons to get down to his genius.

None of that previous sentence was meant as a criticism. Rather, it sums up the journey of the hour that is known as Patrick Carl – Radicarlised.

Patrick has a self-deprecating stage style and is an Australian version of a cross between George Costanza from Seinfeld and Bottom from Shakespeare’s Midsummer Night’s Dream. See, Patrick, you’re not the only one who can make obscure references from the past!

Patrick spends of the first part of his show fishing around in the bottom drawer of his domestic life, bemoaning life after his 30th birthday and then giving his partner a thorough going through. And I mean, thorough. Right down to the smallest hair.

But where he stumbles into the territory of comedic greatness, is in the last part of his show in which he tackles the real issue of whether or not voting should have an upper age limit rather than just a lower age limit.

His downplayed but deeply disturbing analysis of what hordes of votes by 80+ year old voters have left as their legacy for the rest of us, particularly the Brexit vote, is distilled clearly and his solution is at once, perfect and hilarious.

Would love to see more radicarlised commentary of aspects of life outside the bedroom, we need it!

Approach this show with head down and ears back. It is in-your-face stand up and if you keep at it the climax will be worth it.