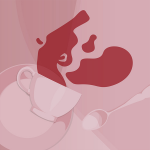 The mystery behind Agatha Christie’s disappearance in December of 1926 has boggled many over the past century, with many theories circulating as to what actually happened to the acclaimed mystery author. The Green Guys Company is here to answer that question in their show Parlour Games, with fun twists, intriguing characters and a Cluedo-esque plot, they cover the thrilling mystery of who killed Agatha Christie.

The show centre’s around the parlour game murder, which works much like a mix between murder in the dark and Cluedo. However, upon the discovery of an actual murder, the game becomes much more real, as they try to figure out who among them is the killer.

The all-Adelaide cast performed incredibly well, drawing the audience into the unravelling mystery, and utilising classic whodunit tropes to make you second guess everything. With the intimate venue size of the Holden Street Theatres The Arch only increasing the drama, as there’s little room for the characters to hide. The set design and costuming also added to the aesthetic of the time period, and enhanced the actors performances.

The game is still afoot for the audience though, as they’re asked to place a guess as to who they think the murderer is: The No. 1 Fan, The Hostess, The Emigré, The Drunk, The Servant, The Major, The Doctor, or The Writer.

With the ingenious use of QR codes, everyone can use their phones to place in their guess of “whodunit” before the big reveal, guess right and you get a cool badge of honour to take home. Though the dark room makes this slightly difficult, and some seats were a little far away from the QR codes, most were able to scan it and guess before time ran out.

The Green Guys Company, aka James Harvy (who also plays The Major) and Neale Irwin, have teamed up with performing arts and physical theatre Director Zoe Tidemann to create this incredible tribute to Agatha Christie. With the fantastic cast including Luca Sardelis (The Hostess), Daniel Hamilton (The Servant), Arran Beattie (The Writer), Alexandra Schulze (The Emigré), Rachael Horbelt (The Drunk), Hayden Stanes (The Doctor) and Deborah Caddy (The No. 1 Fan), who bring their characters to life with a suitable amount of dramatics.

The show itself is a great watch for fans of the murder mystery genre and people just looking for a fun night. The fact it tells of a highly theoretical, yet entirely plausible, series of events surrounding the disappearance of the queen of mystery, only heightens its appeal. With twists, and turns, and tea galore, Parlour Games is at its heart a murder mystery with Agatha Christie, and what’s not to love about that?