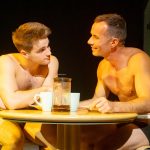 This production of Next Fall is powerful and perfect in every way.

It is the story of a gay couple during the tragic in the hours after one of them has fallen and hit his head badly, rendering him critically injured and in a coma. As family and friends gather at the hospital, flashbacks take us on a journey into their story with all its interwoven complications and tensions arising from the fact that one of the couple, Adam (Matt Hyde), is secular, while the other, Luke (Tom Murdock), is Christian.

But this story, while raw and rich and deeply moving, is full of verve and life and laughter; it has gravitas and generosity of spirit.

It begins with Luke off-stage in a coma, while we meet his friends and family in the hospital waiting room. As we soon discover, there are many threads to be teased and twisted during our time together.

Centre stage is Holly (Claire Sara), who runs the “candle shop” where Adam works. A self-proclaimed “fag hag”, Holly is a centred and central character to this story and in Adam’s life, often being there as a sounding board and compass during his times of anxiety, a provider of income as a boss, and a partner-in-crime when it comes to celebrating life. Claire Sara has a magnetic and measured stage presence and the world does always seem that little bit more balanced and sound when she’s on stage; as actor and character.

Brandon (Jason Jeffries) is Luke’s “friend” who has a quiet demeanour, works real estate deals very successfully, and although he shares a Christian worldview, his is a fatalist one in which he is resigned to believing his “plan” has an expiry date and there’s little to be done about that. Jeffries conducts himself with quiet, almost smouldering, reserve, exactly as one might expect a wheeling dealing deal maker to be; almost impossible to read.

Luke’s separated parents, Ariene (Lisa Lanzi) and Butch (Brendan Cooney), both bring different levels of energy to the stage. Lanzi’s overly-expressive, Southern drawl initially overpowers the hospital waiting room, much like we expect her perfume would. However, as testament to the masterful direction in this play by Darrin Redgate, Lanzi doesn’t remain stuck in that gear, and as the story develops, her presence mellows and we see more dimensions, heart, and courage in Ariene. Likewise, Cooney’s Butch has that pent up sense of rightness and brooding that threatens to explode without being stereotypical. As with all the characters, they are equally drawn with great empathy by playwright, Geoffrey Naffts.

The two central players are exquisite in their performances. Matt Hyde brings a loveable and vulnerable Adam to life, while Tom Murdock embodies a sincere and thoughtful Luke. A great sticking point in their relationship is Luke’s acceptance of and guilt over his homosexual behaviour; at once it is both life-giving through love and life-destroying through sin. Hyde and Murdock draw us in as various flashbacks highlight the unfolding exploration of the internal contradictions in Luke’s worldview and its impact on Adam’s mental wellbeing.

This play is sumptuous on every level. We encounter moments of great delight and fancy, passages of thought-provoking conversation, and excruciating times of conflict. And despite the thick strands of religious philosophy, there is not a lectern or cardboard cut-out character in sight!

Next Fall is a must-see for anybody who enjoys theatre with depth of thought, laughter, and love.