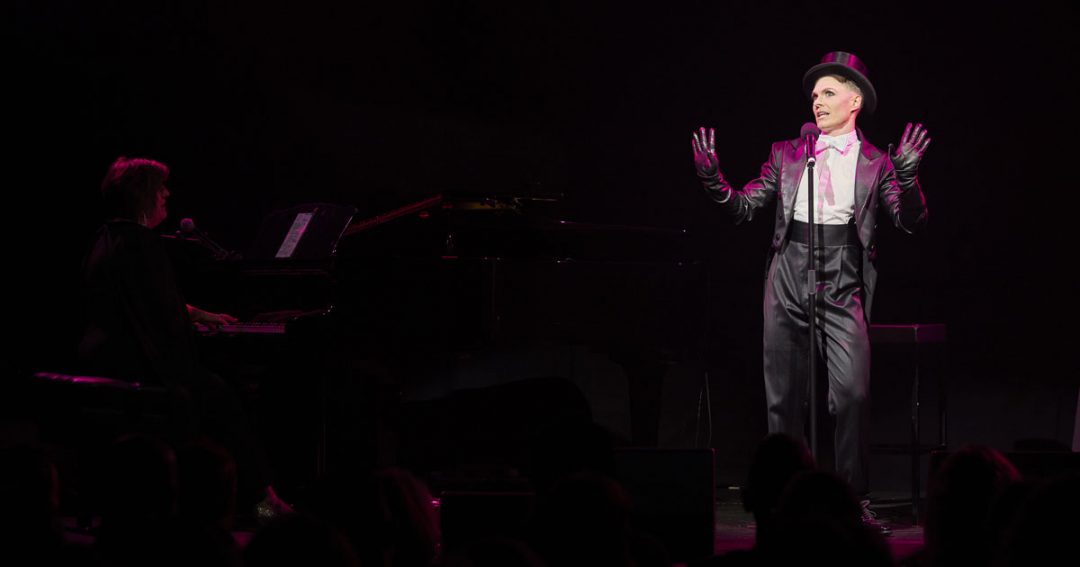 Firstly, he adores the spotlight, so much so, it’s quite possible that such a light would be the one thing he’d take if he were to be abandoned on a desert island. His entrance from the audience, trains our attention to follow the show man.

Secondly, he can sing. From low notes to high, from sultry to celebratory, Kim David Smith is the real deal.

And, thirdly, he can hold attention. There would be very few performers who could remain almost stationery  throughout an hour long show and hold us like Kim did.

A bonus fourth reason that Kim David Smith is pure cabaret is that he can turn his emotions on and off on a dime. There is no great emotional depth here. What there is artifice; pure, free-flowing artifice. For a sad song, we get quietness and sighs, then, with a flick of the wrist and a twirl of the top-hatted head, we are in a different gear and going sexy, upbeat, dance (don’t dance) diva.

There’s something else about Smith. He loves himself. He tells us he loves himself. But we don’t penalise him for that, we don’t write him off as a vain poser. This is because he is authentically, up front about his self-adoration, while seasoning it with at least the machination of self- deprecation. It results in delicious, tantalising joy.

Smith performs many Dietrich songs, see, we haven’t forgotten her, despite the Kim David Smith focus, and seems at home switching from German to English and back again.

While we do get some “back story” and insights into Marlene Dietrich, Smith has crafted a show that just keeps the numbers coming, one after the other. And, for that, we thank him. We can listen to narration about Dietrich any time, when Smith’s on stage it’s a crime not to have him singing.

Hmm, there’s an idea. This show could easily be renamed, Mostly Kim.

If you get a chance, indulge in this Cabaret gem.