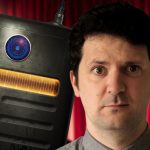 George is a robot. That might not seem impressive however he is, in particular, a CB94 unit, and has quite advanced firmware. Disturbingly advanced, he is self aware. Although his laugh has managed to avoid most of the upgrades. As his life involves in a 24/7 never-ending shift at a convenience store he managed to convince a human, that would be Matt, he’d like to give a Fringe show a bit of a run. Matt has obliged and lugged his sorry ass, more about that later, along to the Wine Center.

The thing with George is, comedy wasn’t in his original programming and if it was, the opportunities of getting much feedback from the rack of beef jerky in front of him, is slim. So George has decided to go with the DIY approach, keeping all of his show secret until the big night. Sadly for George the show he prepared is over rather too soon and he turns to his human assistant Matt, to help out.

Matt is able to help him out, knowing a thing or two about comedy, however we soon are left wondering if George is all quite there? As George’s self-doubt gets worse his understanding of humans becomes troubled, which isn’t surprising because we’re all a bit of a mess. He has troubles with the meaning of comedy, which is very funny. He has trouble understanding humans, nearly proving he’s more human than human. And self-deprecation, the human sort, which is even funnier because he’s a robot that runs on software. As George would say, ha,ha,ha,ha,ha. I think George saw more in that joke than Matt.