Lunch With Jenna: ep #51 The Void Screams Back 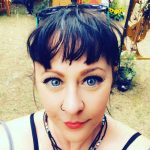 Lunch With Jenna online theatre episodes are always challenging to watch while at the same time being an important exploration of this new performance medium.

Jenna Britten is a middle-aged woman who, after her husband left her, has been undertaking a journey of self-discovery online. As you might expect in today’s online culture, this journey cannot escape explorations of intimacy in all its tentative, ambiguous, dangerous digital forms.

The character of Jenna Britten is one inclined to be a “beacon of strength” to those around her, while she shoulders the burden of her own questions and decisions, and deals with the expected and unexpected onslaught of sexual and violent messages and comments from followers, stalkers, and strangers on social media.

Lunch With Jenna performances are hour-long, live-streaming events in which Jenna is at home, hosting a small live audience and some online friends, as they eat, drink, and share conversation.

In episode 51, the friends were two males who were live streaming from the USA and UK, chipping in with blunt, sexual commentary, brazenly admiring Jenna’s physical attributes while interweaving their input with supportive comments. A third guest was messaging Jenna via Instagram and during the performance he became very toxic. At one point, this “former” friend professed desperate love for Jenna and described how he would hold her and strangle her to death in his arms. He then continued his assault, cycling through professions of love, threats of violence, and gratuitous ramblings about sexual positions and activity.

Jenna is front and centre on screen and around her are picture-within-picture boxes live-streaming the two guests on camera, and a third box temporarily appearing as new text is being received via Instagram.

The “play” rotated through Jenna’s stream of consciousness about men sending unsolicited “dick pics” and their behaviour online, her interaction with her guests, and her juggling of social media screens while engaging the small live audience around her.

Lunch With Jenna is a busy, constantly-distracted hour and this physical rendering of the experience matches the felt experience.

As a result of her stance of being open and intimate online, living the ideals of sex positive feminism, Jenna has encountered much obnoxious behaviour by men and her tirades are raw. She expresses much bitterness as she uses her lunchtime appearance to channel the quiet, righteous rage we feel she has been bottling up for a long time. Fellow viewers who’ve been on the receiving end of toxic male behaviour online will most likely find her narrative rousing and validating, while for those of us who are male but haven’t engaged in such activity the monologues are disturbing and enraging on behalf of my fellow “males”.

It’s important to give voice to this very real and all too common experience endured by many women online, which is why I would like to see Michael Allen Productions further hone this concept to include more structured scripting. As it stands, Jenna’s performances convey accurately a spontaneous rambling of thoughts as they emerge, with much cycling and repetition, and as a result, there are many verbal crutches in use while she waits for her thoughts to catch up (not helped by being distracted by her various social media screens). This would appear to be a very accurate rendering of communication in the age of distraction.

However, in the realm of theatre, it would be golden if the team could find a way to take heed of the reflection by Blaise Pascal who wrote, I have made this longer than usual because I have not had time to make it shorter. There are many diamonds in the rough of Jenna’s dialogue. There is much to sift through to find them. Some writing experiments to try refining this aspect of the show while honouring Jenna’s character, would make the work of discovery a little easier for the audience. More of us would leave with a bounty of precious insights to share with others.