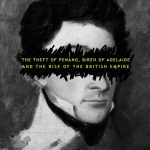 When we collaborate with neighbours from around the world, rather than conquer and colonise them, the human enterprise can flourish and do “exploration” in enriching ways.

And this is what Australian writer/director Thomas Henning and Malaysian theatre makers TerryAndTheCuz have modeled for us in Light.

The two-hour production is divided into two, one-hour acts, the first focussing on Francis Light’s claiming of Penang for the British Empire, and the second on the life and “misery” of Colonel William Light.

The OzAsia Festival program warned that this show might break all the rules of theatre. However, on the contrary, this production rifles through the big box of theatrical devices and conventions, and emerges with a densely adorned offering of layers, colours, media, movement, light, storytelling, and emotion.

The set is as cleverly constructed as the story line. The black set with its subtle grave indent on the floor, pivots later into a doorway as what was the floor is hoisted upwards by 90 degrees to become a new wall. And so on, and so forth The nature of the production is that it never rests on its laurels. Instead, it breathes and changes and moves; much like a creative child giving free reign to their curiosity as they discover a vast dress-up box.

This is not linear storytelling but rather a poetic expression of facts and ideas and vignettes involving our lead characters and those around them. This approach did leave some audience members behind; those more familiar with conventional theatre, while richly rewarding those able to loosen their grip on the unfolding narrative and trust the company to lead them on the journey.

The cast was well chosen and performed as an ensemble of equals. Gavin Yap (William Light) and Junji Delfino (Martinha Rozzels) both morphed from ethereal presences to solid manifestations, depending on the characters being portrayed at each moment, while Martin Blum (Francis Light) brought a solid and sometimes Cleese-like stiff Britishness to his roles.

This play shines a light on the vagaries of colonialism as well as the vagaries of how humans record history, casting shadows on our certainty of memory while illuminating our various human motivations, both base and noble. Its enduring message is to remember humans always take their history with a shot of bias.

And few moments capture how aghast we should be that Light’s vision ever came to pass, than when William eventually has his idea approved by the powers that be and lifts his glass to say, seeing all you gentlemen today makes me want to raise my glass to the working classes. Ouch.