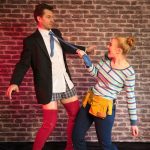 When the Gilbert & Sullivan Society decides to step away from its staple of G&S operettas, it likes to put its best foot forward.

By trying on Kinky Boots for size, the Gilbert & Sullivan Society seems to have stumbled into some bright, fun material that leaves audience members exiting The Arts Theatre with smiles and some extra bounce in their steps.

While based on a true story, the allure of Kinky Boots is not for its storyline because it’s a story of triumph we’ve all heard before (a shoe factory making old style shoes is going out of business until the son of the late owner steps in and makes a new product that saves the day). Instead, this show’s appeal is based on its razzle and dazzle as our protagonists strive to be accepted for who they are through the medium of some gloriously glitzy numbers.

Just like making a sturdy pair of boots, director Gordon Combes has inspired his directorial team, production team, and cast, to take a patchwork of actors and musicians, stitch them together in a fashionable pattern, lace them with some choreographed flair, and then collectively to kick up their heels in some classic, Broadway-style showbiz panache.

As one expects from the G&S Society, there is detail, clever detail, in the set design and costumes, along with some inspired flourishes with props such as the impromptu blast of air through the hair by Lauren (Jemma McCulloch) as she leans back on some factory equipment mid song.

The cast performed well with good chemistry between the two leads (Charlie Price played by Ian Andrew, and Lola/Simon played by Rob Abelita), and also between Charlie and Lauren. A magical moment between Lola and Don (Warren Logan) post boxing bout in the second act, is also a beautiful moment of two hearts risking honesty between each other.

In fact, the cast was well balanced and the show’s only weakness was the 80s blandness of some of Cyndi Lauper’s compositions in the first act (excluding the dynamic opening number). But such a criticism is relegated to the shadows when you consider the powerful, memorable numbers throughout the second act. And the band should not bear the brunt of this disappointment because it was excellent and created a richness to the evening.

Even though it might require a little wearing in during the first act, Kinky Boots is a comfortable, luscious production that is simply a joy to watch.