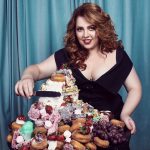 Just Desserts – Adults Only Tasting opens with delicious music and a decadent tower cake adorned with donuts, pastries, and confectionary.

In fact, that cake is the perfect analogy for this cabaret show.

The base is the band led by Kyrie Anderson, Michelle Pearson’s musical director. A rich, warm sound that switches from genre to genre with some standout keyboard work, too.

The upper layer of the cake is the pastry chefs who fed the audience in three rounds of dessert, dotted throughout the show.

The rich, luscious frosting is Michelle Pearson herself. What a dynamo. Her voice devoured the range of songs and she seemed to float gracefully around the stage.

Michelle and Kyrie combine powerfully and the audience was delightfully stunned by their reworking of Cat Stephen’s Wild World twirled around a centre of Little Me.

Then the adornment of donuts and pastries and confectionary around this cake represents the monologues Michelle delivered as she lamented many aspects of life in a society groomed to judge quickly based on superficial evidence.

There is a master stroke at work here. Just like the various goodies on the cake, Michelle’s various passages seemed to be dotted throughout the show in an ad hoc manner, touching briefly on themes (it’s okay not to be okay, and, be true), and then moving on; like someone with cravings being let loose at a dessert buffet.

Just like a tiny dessert trifle, these potential gems are enjoyed but we know we want her to return one day to develop them further. But perhaps that would be a show called Main Course rather than Just Desserts?

There is some beautiful interaction with the audience, especially for one lucky man, who had exotic blessings heaped upon him and into him during a divine rendition of God Is A Woman.

This might just be a nice way to finish off a Fringe day.