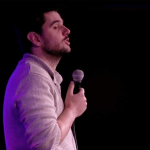 Everyone is a little bit weird, to the point its normal not to be normal. In his first ever solo show, Adelaide Comedian JP delves into the bizarre sides of humanity through stories and hilarious anecdotes about his life.

The stand-up show was opened by The Beautiful Bogan, who spent a great 15 minutes warming the audience up before introducing JP onto the stage. Striking and interesting figure with incredible high heel shoes, JP starts the show with the perfect blend of subverting the ideas of normal and showcasing his great taste in fashion.

There were some first show jitters here and there, making the show a little disjointed, though when JP was confident in his material his awkward personality was overtaken, and he became very animated when telling his jokes.

Despite a bit of a rocky start to the show, JP played off the audience very well, and had everyone laughing. Covering topics from Uber rides, his hatred of cats, his partner, his kid, sex and much more.

Placed in the James Alexander Room at Mercure Grosvenor Hotel, the venue is on the smaller side, but it encourages an intimate experience between the audience and JP. Making the stand-up show feel like chatting to a mate, who is telling you weird things that he had experienced since you’d last caught up.

JP: Normal People Are Just People You Don’t Know That Well is a great show for a good night out with friends, and for supporting local comedians.