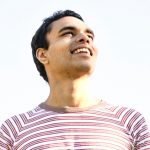 The State Theatre Company has taken the advice of Jasper Jones and “gotten brave” for attempting to condense the essence of such a beloved book (which has more runoffs and tributaries than the River Murray) into two hours of theatre.

Kate Mulvany’s adaptation is overtly theatrical with our main character, Charlie, narrating for the audience while slipping in and out of the play’s many vignettes and scenes. And like the rapids in parts of the Murray river system, there are passages in this production when scenes chop and change in quick succession with props being spun, rolled in, rolled out, dropped down, hoisted up, fogged in, darkened, lightened, and so on.

The action begins with Charlie in a floating cutaway of a bedroom, reading on his bed next to his louvred window. As Jasper arrives and beckons Charlie to follow him, window louvres are removed and we and transported into a childhood world from simpler times when kids slipped away for nocturnal adventures and parents were aloof and content to let their offspring roam (within reason).

There was a striking contrast between the gaits and poise of our two main characters. Jasper Jones, carries himself stiffly while moving with singlemindedness (much like the way we see Aboriginal trackers portrayed in Australian film), while Charlie Bucktin is hapless and gawky, especially as he is drawn into the natural world, Jasper’s world, amid the ring of tall, strong eucalypts that form the backdrop of the set. Through this device, we witness the different worldviews of a young boy who’s had to survive and become street smart, and the other who’s had the privilege of naivete.

Jasper Jones is the story of a town scapegoat, Jasper, who is so because of his dark skin and broken family. Australian society, especially in smaller communities, has never quite coped with “the other”. In such places, the fears of the townsfolk are projected onto their scapegoat, which is certainly easier than interrogating one’s own acts and motivations. It is also the story of another kind of underdog, Charlie Bucktin. Charlie copes with his boredom, loneliness, and bullying, by escaping into books, until his path crosses with Jasper when a young girl’s body is found on the outskirts of their country town. This tragic event draws these two characters together in a bid to solve the crime before the usual suspect, Jasper, gets unjustly blamed and punished.

It is an intriguing experience watching mature actors play young teenage characters. There is a delicate balance between capturing the awkwardness of juvenile mannerisms without tipping over into the style of exaggerated caricatures as seen in much children’s entertainment.

While there were moments when Jasper Jones did feel like a Year 12 production (particularly some of the action scenes, our Hamletesque ghost, and some particularly cartoon-like interactions between Charlie and his mum), there was grit as well. This grit is there not least for the language and themes but primarily for the complex constructions of empathy that arise as we follow each character and endure their plights.

There is something fresh about Jasper Jones. Apart from attracting a noticeable younger audience than conventional theatre productions, this is a disarming, self-conscious piece of theatre that wins our hearts for its earnestness and the unfiltered way it shares its messages, much like you’d expect from a 13 year old’s view of the world.