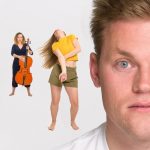 In Isolate & Izolál we explore whether or not humans should colonise Mars.

There is something about our genetic make up and evolutionary momentum that suggests it is inevitable that we try, however Isolate & Izolál is a meditation, a reflection, a poetic expression of a cautionary voice calling us to pause and think deeply before we push forward.

The opening act, Isolate, features Cameron James as a lone astronaut on the first manned mission to Mars. The stark set, the fledgling pots of vegetation, and the background hum of engines and air conditioning, all combine to create a sense of an elementary almost embryonic existence in which this one man is more aware than any human of how desperately we rely on cycles of recycling for life. The plants recycle oxygen, the air is recycled by the space ship, and a filtration system means the water he drinks he has drunk and passed before, over and over again.

We meet Cameron approximately 200 days into a 400-day journey as he is poised to make the Go or No Go decision; the point of no return. Will he be the first man to “piss on Mars” and what will life be like in a place harsher for the human body than Antarctica? At least, even in the extreme parts of Earth, we can still breathe the natural air and drink the natural water; there is some semblance of being sustained.

There is much to ponder and that pondering is made harder when fundamental elements we take for granted on Earth, like circadian rhythms, are scrambled in an artificial atmosphere.

In the second act, Izolál, Petra Szabo and Delia Olam, take us deeper into a reflective state as their offering of dance, music, and voice, plays with notions of what it means to be human. Indeed, this is worthy fodder for a species poised to try to recreate itself in a different place.

As with the first act, these players are not afraid to let silence and stillness and slowness reign. Perhaps this is a symbol of the vast distances involved in colonising Mars and the long, necessary evolutionary stages we’ll need to endure before a new dawn can begin.

And in this physical poem, we are reminded of our potential for beauty and deep nurturing, as powerful, beautiful voices entwine and play, as bodies move and yield life and seek nourishment from elements like earth and water.

It is striking how such resonance can be created from such simple elements. We might do well to cherish these things a little more and rekindle our fondness for the little blue dot before giving in to our lust for the red planet.