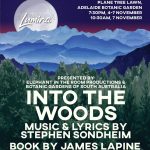 Into The Woods we went, a series of full-house audiences, to huddle together under tall trees (the trees are only wood) and be transported into the hilariously fractured, Roald Dahl-like, fairytale world created by Stephen Sondheim and James Lapine.

And it was worth the “agony” of every stiff leg and craned neck because Elephant In The Room Productions and Botanic Gardens of SA manifested a clearing of joy, tucked away from the decidedly nastier characters who have been treading the world stage in recent years.

The performance took place just a short stroll in from the Friends’ Gate, before the kiosk and restaurant, on a wide stage with a simple black backdrop, book ended by a simple tree cutout on house left and a simple castle cutout on house right. Next to this was a 7-piece orchestra, which cast an aural spell of Broadway magic upon the night.

Into The Woods is to fairytales what the DC and Marvel multiverses are to the world of superheroes; there is a great intermingling of “franchises”. The story centres around a baker (Jamie Moffatt) and his wife (Katie Elle-Jackson), who have been trying to have a child without luck due to a curse of barrenness on the baker’s family by a witch (Danielle Ruggiero-Prior). The witch (who also happens to be Rapunzel’s mother), demands certain ingredients be collected by the couple before she will reverse the spell. And these items require the couple to cross the paths of Jack (of beanstalk fame), Little Red Riding Hood, Cinderella, and Rapunzel, but in the process the story also intersects with Sleeping Beauty, Snow White, a wolf, princes, and giants.

The prologue was all we needed to experience to know this was to be a solid performance by a gifted cast, guided by Scott Sharrad (director) and Jane Feast (musical director). While the ensemble work was strong, there were some breakout moments in which particular characters shone.

For example, Little Red Riding Hood (Claire Langsford) immediately endeared herself to the audience with her slightly manic, happy-go-lucky performance. Watching her skip with gay, crazed abandon across the stage will be long cherished. Equally, the other desperately naive character, Jack (Nicholas Munday), had a delightful presence and strong voice as he traipsed about the fractured world, ever hopeful, ever good-hearted.

To single out performers in this production is fraught with danger because all had strong moments to shine and all resulted in notes of adoration within my reviewer’s notepad. The Witch (Danielle Ruggiero-Prior) began with a cackle and ended with strong, diva gusto, The Baker’s Wife (Katie Elle-Jackson) was strong throughout but positively glowed during and after her liaison with Cinderella’s Prince (Blake Ascione), who, as an aside, achieved peak sleaze as The Wolf in his first encounter with Little Red Riding Hood. And Cinderella (Alexandra Gard), it should be noted, outshone her lowly rags right from the opening notes of the prologue, with Gard majestically showcasing her State Opera and Co-Opera pedigree.

And a bravo for costume designer, Sheila Moffatt, who created a world of whimsy with one highlight being the understated but perfectly chosen tops for the princes.

Amid a night of wonder and laughter, the only note of concern was the obfuscation of some of the stage business that took place at ground level. With audience members also seated at ground level, re-plotting these actions onto the elevated stage would have made the night perfect.

Overall, there was a great timeliness with this production and its theme of learning to swallow fears and summon courage to delve into the woods, just as humanity is encountering an unsettling era of fresh sabre rattling between ogres on the world stage. We are reminded that trees are just wood and the wood is just trees. This recurring theme has been artfully etched into the memories of the audience, aided and abetted by Sondheim’s perfect composition.

And, amid the irony, sarcasm, and wit generated between the characters, there was a poignant irony arising from one of the Witch’s most beautiful moments with Rapunzel. The “mum” laments that if only what was growing was her daughter’s hair and not Rapunzel herself, she would have something safe and unchanging to cling to. And yet here we were, an audience of adults, clinging thankfully to the “giant breast” of this cast of fairytale characters. We were together with these mythical and archetypal characters from our childhood, deriving succour and warmth and joy, and a reminder that life does go on, bad things do happen, but that with them in our memories we are never truly alone.

Thank you, Elephant In The Room Productions. This exquisite production, handsomely and rightfully rewarded by full houses, left us all with the sweet agony of knowing we’d chosen well to venture to your festival of song, story, and laughter, while it played, and now that we’re home again, we are richer for having experienced this moment in the woods.