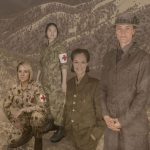 Conflict medicine is a field where only the brave and the driven can operate successfully.

In Hallowed Ground – Women Doctors in War we get to meet a number of women who have served Australia, our allies, and humanity in various locations and situations in response to a deep calling to do their part.

Through this four-hander, we are introduced to a number of characters (who are composites of real women) through a series of vignettes that take us into the uncomfortable, dangerous, and frustrating experiences these women doctors endured at different times in history.

As the actors rotate between roles using simple props on a clear set, an array of profound images projected behind the players builds upon the ingenious soundscape to create a deep sense of immersion into their various worlds.

It is fitting the soundscape opens and closes with a heartbeat. Firstly, the women doctors portrayed demonstrated great heart in their service, often going above and beyond the call of duty at the cost of their own health and their own places within their families. Secondly, the haunting sound of a heartbeat was a perpetual reminder of how fragile our connections to life become at times of war and humanitarian crisis.

Talking of connections, that was another theme running through this play. There are references to saying goodbye to children and family on the way out to deployment. And, interestingly, not only on the part of the women doctors but also of injured, male soldiers. Such nuance runs through this play, deepening its relevance and its authenticity.

There are also references to strained, reserved connections to family back home, especially during very short phone calls from base camps so that no confidential information was betrayed, nor any emotional vulnerabilities.

And there was connection between our doctors and their patients, be they injured soldiers or refugees and displaced persons in camps. A particularly heartrending story involved one peacekeeper in Rwanda having atrocities performed in front of her deliberately while inside she was raging against the UN’s mandate “not to engage”. The palpable outplaying of the human connection between doctor and those in need in this vignette, will haunt viewers for a long time.

Mind you, much in this production will haunt viewers for a long time, especially every Anzac Day, as we’ll now recall these women’s stories as part of our emotional and historical journeys on these commemorative days.

The play by The Shift Theatre has been adapted from the book, Not For Glory, by South Australian army veteran and surgeon, Colonel Susan Neuhaus CSC (Retd) and Dr Sharon Mascall-Dare.  The book documents a century of service by medical women of the Australian Army and its Allies.

In particular, The Shift Theatre play focusses on:

This is important war theatre that strikes a good balance between military, political, social, and personal factors, as well as playing both to the logical and emotional sides of its audience.

That said, this is demanding theatre to watch and requires application as the stories appear, one after the other, each building on the emotional and educational payload of the one before. For casual theatre goers, this play will get particularly tough about three quarters of the way through as the build up of stories seems to be unending. But then, almost out of the blue, the mission is completed with a poignant recollection of one woman doctor being addressed by a civilian at a dawn service. A simple thank you is exchanged and you can be sure every audience member of this production is at once yearning to pass on a similar message at the next opportunity with renewed “vim and vigour”.