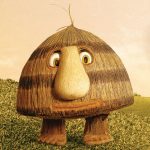 Empathy is alive and Grug by Windmill Theatre Company is proof.

In a simply creative 35 minutes, the Windmill cast is able to bring to life the adorable children’s book character by Ted Prior, Grug.

With a colourful and textural set, we learn about how Grug came to be and then we witness Grug navigating the disappointments and delights of life.

For example, when snails eat his cabbages, he plants more cabbages so there will be enough for all.

And then, at bedtime, both Grug and snail get a blanket resulting in a theatre covid-half-full of 6 year olds and adults all sighing with delight and warmth.

The oohs and ahhs symbolised the power and pervasiveness of empathy in the audience. There is hope for the world yet!

The undulating grassy hillside, the centrepiece of the set, is a cleverly understated piece of design with doors and flaps able to be removed to show us rooms and nooks within.

Of particular note is the unexpected cutaway to view a fish underwater. A gently masterful stroke of design.

Equally masterful was the puppetry, particularly the worm. While Grug and the snake are manipulated in an orthodox manner, there is something magical about the worm; the shimmering way in which it moves. At once it both threatened to trigger our revulsion from creey crawlees while also endearing us with its cute innocence and smallness.

The duration seems to be perfectly matched to its target audience of young children and there was a gusto of responding during the call and response moments towards the end of the production to confim that the audience of little people was suitably engaged.

This production celebrates 10 years of performances in 2020, and will add to the more than 50,000 children and families worldwide, who have enjoyed the adventures and Pooh-like demeanour of Grug.