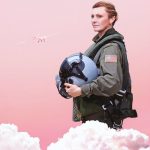 Martha Lott takes on the character of a US Air Force pilot who becomes grounded due to pregnancy and then freefalls through unexpected turbulence and awakenings as she re-enters the Air Force after her maternity leave.

Grounded is rich with irony as the warrior’s military life and ambitions are juxtaposed against her domestic ones.

Her joy and fervour in identifying and striking a target is matched by the intensity of her love for her daughter and the numerous waves of renewal of love and appreciation for her husband.

Until one day, that is.

As this mighty warrior gets relegated/promoted to the “Chair Force” to fly drones, she faces a profound reckoning. Instead of pitting her life and skills against an enemy in real time in situ, she can now obliterate characters on a screen from the safety of an airconditioned compound tucked deeply within the USA.

Is there any nobility to be salvaged for such warriors?

Is there anything noble in butchering “enemies” and “innocents” in the name of any geopolitical cause?

These are heady questions we are left to ponder when we re-emerge outside and under the blue sky; the space now brimming with drones, satellites, and all forms of monitoring and lethal firepower.

Ultimately, Grounded locks onto the key message that we are all grounded and bonded by our common humanity and maybe, just maybe, it is right to feel uncomfortable about the all-invasive, cold infrastructure of modern war machines because this beast we’ve unleashed might just come back to bite us.

If you enjoy diving into philosophical waters, this show would make a perfect pigeon pair with Bin Laden: The One Man Show. Yet again, more satiating Fringe fare from Holden Street Theatres.