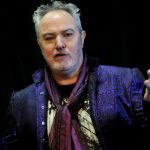 To spend an hour at Greg Byron in Poetic Licence is to spend an hour experiencing what entertainment must have been like in the presence of a troubadour in an Elizabethan court. And by this I do not mean this show is an olde worlde confection, but rather it is a contemporary experience of having a poet distill issues of the day with disarming and delightful wordplay.

From anger over the state of the environment and world politics to the wonder of relationships and science, many topics and themes are covered as Gavin Robinson’s Greg Byron regales his audience with wit, warmth, and the occasional cringe.

Greg is an engaging character, dressed in fine costumery, with poetry in hand and a wink in the eye, who engages his audience as he recites his poetry with Thespian flourish.

If you have an aversion to rhyming couplets, you might find this show hard going but if anybody could restore your faith in this style of poetry it would be Greg Byron. His poetry needs to be heard and he brings it to life with beautiful variations in pace and tone.

Because Greg has the ability to modify his “set list” each night, do not let him leave before he performs his poem about an 82 year old man reflecting on life. In this work, we see the world reflected in a stranger’s eyes and in doing so we touch many common truths about being human.

This actor of greathearted heft
Is worthy of an hour’s theft
So go no more a-roving friend
Until your ears have given lend
To this fine man, to his fine verse
For he’ll reward your open purse