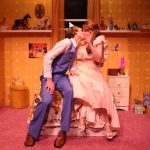 Who would have thought a coming of age story could still hold our attention in 2019?

I didn’t. I was fearing a long night of earnest awkwardness but such fears were dispelled within the opening moments of Windmill Theatre Co‘s Girl Asleep.

This third part of a trilogy which premiered back in 2014 was then developed into a film, has been revisited and refined by the Windmill team and what a purely delightful piece of theatre they have created!

Girl Asleep is the story of Greta Driscoll’s transition into adolescence, beginning on the eve of her 15th birthday as she starts a new life at a new school in the 1970s.

Our shy protagonist befriends (or is befriended by) an awkward, gangling boy, Elliot. Their unlikely friendship provides an important grounding for both of them as the emotional, physical, and psychological merry-go-round of adolescence picks up speed within their minds and bodies as they both start hurtling towards adulthood.

This story unfolds through a series of scenes that traverse different modes of theatrical storytelling. From Greta’s opening narration direct to the audience, to wildly haphazard dance-led “tableaux”, Girl Asleep is a journey of wonder and delight (for cast and audience alike).

While there is much fun, colour, and whimsy in the telling of this story, there is a poignant narrative at its base; the dread of being compelled to let go the safety and surety of childhood in exchange for the chaos, danger, and accentuated emotions of adolescence. One of the most compelling moments of this journey is when Greta’s older sister momentarily puts aside her mask of bitchiness to embrace and comfort her sister in a time of great hurt and bewilderment. This moment looms large against all the busyness of this tale. Two siblings, both feeling helpless and adrift amid the frenzy of teenage life, understand in that moment that they are there for each other and must be there for each other if they are to make their ways safely and sanely in this world. Leonard Cohen once wrote that every heart to love will come, but like a refugee. And here is that mechanism writ large. Empowered by this new source of trust, Greta can start finding her bearings and owning her relationships on her terms.

What is refreshing about this story is that Elliot’s character is also treated fairly in Matthew Whittet’s writing. It is easy to write off all teenage boys as bad but Whittet’s Elliot is as equally bewildered as Greta as they both strive to make sense of their place in the world and in each others’ lives.

Girl Asleep also draws attention to the existential pressures being heaped upon today’s adolescents by our social media culture in which every waking moment is curated and shared and judged by friends and strangers. To think that a despairing Greta in the 1970s could exclaim, I live my life being private, one’s heart becomes heavy for the plight of today’s young people undergoing their rites of passage.

This production maintains a breezy pace throughout as every possible nook, cranny, and framing of the deliciously 70s-kitsch set is explored and exploited. The left side of the V-shaped backdrop is adorned with versatile, “shape shifting” family portraits and a staircase, while the large, drawn, living room curtains on the right side are alternatively opened to reveal Greta’s bedroom complete with window and a single bed that rolls onstage and offstage with each appearance.

There are many textures and colours in the materials used on set and for the many splendid costumes. Such thoughtful layering ensures these tangible aspects of the show hold their own amid the layers of physical theatre, driving soundtrack, snappy dialogue, and inventive interplay that is brought to life by the players as they traverse real life, vignettes, and dreamscapes.

I heartily recommend Girl Asleep because it is theatre of importance infused with great joy, whimsy, and delight!