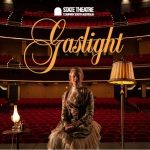 Gaslighting is a hideous act in which a person undermines another’s sense of self and sanity through psychological manipulation. It happens in many relationships, especially when there is a power imbalance, and is common in domestic violence.

We have playwright, Patrick Hamilton, to thank for coining the term “gaslighting” because of his play Gaslight, on now at Her Majesty’s Theatre.

Gaslight is set in London in the latter half of the 19th Century, in the home of Jack Manningham and his wife Bella Manningham. It spans a late afternoon (just “before the feeble dawn of gaslight and tea”) and evening. Bella is looking stressed an anxious and we quickly see that her husband is the source of this unsettledness. He swings in tone and mood from loving to hateful, from kind to sneering, and he embarrasses her in front of the servants, especially as he taunts her for hiding a framed portrait and even the grocery bill; items we learn have been hidden by Jack as part of his gaslighting of his wife. He reminds her often that her mother died in the “mad house” and that she’ll be heading there soon if she doesn’t “get better”. When Jack is out for the evening, Bella is visited by police inspector Rough who informs her that Jack visits the empty apartment above them each night, searching for jewels; the jewels were the reason the apartment’s late occupant was murdered. Is Jack involved? Will Bella ever get her revenge on her oppressive husband?

This season of Gaslight is an important one for theatre in South Australia. It is one of the first signs of life and light after a period of darkened theatres due to Covid-19. Amid a chequerboard seating arrangement allowing for empty spaces between patrons, we were wowed by the majestic Her Majesty’s Theatre, and titilated by a light and omnious Music Hall number performed by Eileen Darley in front of the heavy red curtains.

When the curtain was raised, we beheld a sumptuous set of a drawing room drenched in red/brown sepia tones and rich with detail and depth. The opening scene with Jack (Nathan O’Keefe) and Bella (Ksenja Logos) was sublime. Hamilton’s dialogue and the actors’ modulation of intensity and intent, kept us on edge and drew us into a dangerous relationship, uncomfortably full of foreboding. As Fitzgerald says in her notes, themes of patriarchal power and class are as relevant today as they were when this was written, and the opening half of act one charts this territory with great clarity.

However, Hamilton needed a powerful editor to wade through the bleak and earnest monologues of Inspector Rough (Eileen Darley) – I was reminded of the saying, I’m writing you a long letter because I don’t have time to write a short one. In the full script, Rough is indeed a rough diamond and terribly mysoginistic comments punctuate his role as solver of crime and liberator of a wife from a domestic violence situation. The non-traditional casting of Darley as Rough provides some turbulence to navigate. Initially, we have to adjust to the “artifice” of obviously faux sideburns (to symbolise a male character), which sends mixed signals. Are we in for high melodrama, we pondered? No, we were not. These Music Hall props are to be subsumed within the mission of providing a “contemporary lens” through which to view this period piece. Alas, the long, long monologues were not adapted with this same contemporary spirit. Audiences who had become “out of shape” for endurance theatre and who had been grazing on snappy content on Netflix, were plunged into an endurance trial, almost creating a form of gaslighting itself. Are we really witnessing such long monologues? Have we missed the moments of light and shade and relief, typically employed in theatre to recharge our focus? Is it wrong and naive of me to voice these concerns in public?

There is, no doubt, a wonderful richness of clever insights in the script but our modern limits of mental stamina are not those of last century. I worry that the most common comment overheard in the foyer was how wonderful the actors were for remembering so many lines. To this reviewer, that is not what the great take away should have been. There is always a challenge to be met when a production seeks to make an earnest point and execute an agenda; entertainment value can sometimes become a casualty.

I would dearly, dearly love to see this as a powerful, one-act play, so the power of the opening and closing scenes and the most profound moments of the “in between” stretches, could impress upon modern audiences that theatre of this stature and of these themes is important and can etch memorable and value-challenging ideas into each and every audience member.

Do not get me wrong, please. This is a fine production with actors at the top of their game, but I wonder if the writer needs to be stood up to, for the greater good, or ushered in and welcomed into the “new normal” with a more contemporary approach to their timeless, salient, and enduring message? One could easily imagine this being reappropriated for the modern age in a style similar to Bell Shakespeare with the Bard’s works.

If you left the theatre questioning your own suitability as a theatre lover, please dismiss those doubts. This was hard work. This was a potent collection of ideas and virtues, and once we’ve all retired to our bedrooms like Bella did, our own kindly inspector Rough will be sure to pry open our hitherto locked appetites for theatre, and show us that there is more to come and more to enjoy and we can boldly think out loud and voice our confusion or disappointment should we ever encounter those feelings again.