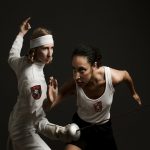 Games by Henry Naylor is a play with a message.

And that message wells up from the elegantly minimalist set, amid mists of stage smoke, as we are ever-increasingly reminded that the “games” of dangerous players like Hitler and Trump can destroy lives and can infiltrate even the most politically-aloof among us.

You will not miss the imagery. We are reminded that winners and warriors thrive when masks and uniforms dehumanise their competitors and enemies. We see Hitler’s rise as an allegory for what is happening in the USA now; it starts with talk of draining swamps and culminates in the politics of labels.

But while there is a deftness in the conveying of these messages, there is much to absorb and be intrigued by.

The intertwined stories of Jewish athletes Helene Mayer and Gretel Bergmann and Helene’s ultimate test of loyalty to “tribe” in the 1936 Olympics, are compelling.

In a masterfully crafted narrative, we follow the journeys of these reluctant political “heroes” and it is a joy to watch.

Even without Henry Naylors’ tenacious underlining of his messages, the story itself sounds a profound warning about the slow and steady way injustice and propoganda can take hold, reframing reality for a gullible, trusting, and/or indifferent public.

Stories like these are treasures and they ask us to take stock of just how strongly we would or could stand against a turning tide.

The only element missing from this warning story, is the famous quote by Holocaust survivor, Martin Niemöller:

Holden Street Theatres has another solid work here and one that anybody nervous about the current political winds in our nation might see, to bolster their resolve to play a role in the resistence.