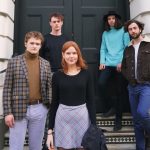 Under the stars in the courtyard of Treasury 1860, a group of five students currently studying music at Adelaide’s own Elder Conservatorium, is performing a show entitled, Feeling Good: Songs of Soul & Blues.

With anticipation, we await the songstress’ voice, and then it emerges. She hits the notes and carries the passion of this classic, with a little cool distance that borders on sultry, but not quite.

Grace has depth and presence that is threatening to emerge, much like a vividly colourful bird edging closer to unlock the door on a glittering bird cage. And Feeling Groovy is a magnificent vehicle for giving us glimpses into this future dynamo of the stage who will soon be soaring to great heights.

There are some intriguing contradictions in Grace’s stage presence. At one moment, she is conversing with us in a deadpan manner, perhaps due to nerves or an introverted nature, but then as the music plays, she taps into a hidden spirit even, at one point, defiantly stamping her own melody upon an Aretha Franklin classic, before leading us on an eclectic journey of soul and blues music.

But there are many joyful tunes and surprises, from Etta James to Amy Winehouse. The Winehouse track, in particular, serves to remind us schmoozers of late night jazz and blues clubs that there are many more songs than those contained within the classic songbooks; stretching us beyond our safety (lazy) zones is perhaps an important role for young, gifted musicians to play.

There seem to be few instruments these band members cannot play, with us being treated to saxophone, piano, drums, guitar, synthesisers, double bass, and bass guitar.

This is a glimpse of five new music careers arising over the horizon and to see this show will be to honour the true, authentic essence of the Adelaide Fringe; to take a chance and share some attention for emerging artists.

To do so will not only have you enjoying music, but altruistically you’ll have every right to be “feeling good” about honouring the emergence of yet more talent from South Australia.

TIP: Keep an eye on Treasury 1860 gigs because various band members are appearing in other shows that all promise to be sublime.