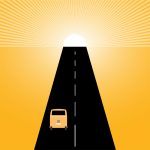 From the opening moments of Euphoria, anybody who’s ever lived in a country town will know that a mirror is about to be held up to their lives for the following 80 minutes.

From the well-meaning, bright, and bushy-tailed teacher, Meg (one of many characters played by Ashton Malcolm), to the good-hearted but troubled young country boy, Ethan (one of many characters played by James Smith), writer, Emily Steel, has distilled (or should that be ‘di-steeled’) the core essences of the archetypes you typically find in any Australian country town.

Meg starts the action, thanking us for turning up to a meeting to plan a festival to celebrate her town’s features. Then, we move from scene to scene, punctuated by a deep whoosh and lighting change, as we learn about Ethan’s relationships with friends and family (and the tragic loss of his dad in a single car accident), and Meg’s anxieties about making sure the festival goes off without a hitch despite logistic challenges and jealousies.

The dialogue is well-written and will pass the country pub test for authenticity, with its structure, lexicon, and pacing – hats off to the actors and to director, Nescha Jelk, for taking such care with these elements. With two actors darting between half a dozen roles each – and swapping roles in some scenes – such clarity of character is crucial but in this case it’s also been pared with exquisite timing and courage to incorporate pauses.

A golden moment was early on, just as we’ve accepted that characters in such a fast-paced, two-hander are bound to be stereotypes, Malcolm emerges as Nick, the mechanic, wiping her/his hands on a rag. Ethan’s narration exclaims, here he comes wiping his hands on a rag like a true stereotype. This is the most sublime wink to the audience and was richly rewarded with hearty laughter.

Steel has used the stereotypical characters to give us our bearings quickly, without diminishing her ability to take us into deep, emotional territory, which she does, as the play progresses.

There are three universal themes in this show. One of these is the tension between people with and without wealth and the different sets of life options they have access to. Another is the sinister allure of the urge to “ditch the meds” by people on medication for bipolar and similar mental health conditions, especially when entering into manic phases; this is a lived experience for many people. And, finally, the inclination within country communities and at all levels of our society towards avoiding discussion about disturbing thoughts, feelings, and experiences. Such depth, however, is covered with plenty of wit, warmth, and humour, amid stark moments of despair and loaded decision-making.

Euphoria is a sharply-written, thoughtfully-directed, and heartily-performed play that is bound to continue drawing audiences into an euphoric state like it did on opening night.