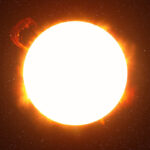 As soon as you walk through the door of the theatre, you are thrust into the sci-fi dystopian world that is Escaping the Burning Sun: A Play With Two Endings. A world in which human’s stop aging after a certain point, and overpopulation is solved through a government mandated scheme that sends selected people right into the Sun.

Written and produced by Quasar Acts founder, Jaziel Siegertsz, the play follows 15-year-old orphan Sagan Page as she lives in this unfair world that took her parents away in ‘The Burnings’, otherwise known as ‘The Qualifications’. The show itself has two possible endings, which you as the audience get to decide through popular vote. The consequence of this choice determines the fate and lives of the characters.

This is a fresh, heart wrenching, and occasionally humorous take on the classic dystopian tropes of totalitarian governments and the elite using capitalism to sway the rules of the world in their favour. Escaping the Burning Sun is the kind of story that makes you uncomfortable in the reflections of our own world that you can see within it.

The sound design enhances the play significantly, heightening the absence of sound in space, the buzz of listening devices, and the dichotomy of a calm voiceover telling you the pleading screams of a young girl should make you happy, because at least you were not the one sentenced to death.

The play builds tension well, transitioning from joking post-modernist fourth wall breaks at the government threatening people, to impassioned speeches about the horrors The Qualifications evolved into, and screaming break downs over their emotional consequences. The costume design choices we’re also well thought out, showing the stagnant ages of the cast through their outfits, as those who are significantly older are shown in more outdated fashion.

The exposition into how this world works felt somewhat forced at times, and one or two scenes didn’t quite fit tonally, with some plot threads being abandoned as the show pushed forward. Overall though, the story flowed together rather well, with the cast bringing their characters struggles and heartbreak onto the stage with passion filled talent. The lack of microphones did not greatly impede their performances, as they could be heard clearly throughout the small room. Though, Cruskits were probably not the best choice of snack for characters to eat during a conversation, and some cast members were significantly quieter than others.

While sometimes cliché, Escaping the Burning Sun is a great watch and an incredible first production by the up-and-coming play-write and producer Jaziel and his fantastic cast. With barely a sight of first night jitters, the show can only get better from here.