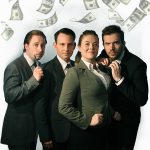 Good theatre gives us a glimpse into our inner world. However, in the case of Enterprise, we get a glimpse into the inner workings of all those corporate skyscrapers that tower over us in most modern cities.

Behind the impressive structures of steel, glass, and concrete, humans are engaged in all manner of enterprise; saving their jobs, dealing with personal conflicts, competing for the sake of winning, oh, and applying themselves to keeping their financial life support system, their actual corporation, functioning well enough to fund their futures.

Enterprise by Brian Parks is a blistering, hilarious study of the complex, savage, and self-focussed ecosystems created within enterprises the world over. With close to 50 scenes in 70 minutes, the pace is unrelenting as our four protagonists, Owens (Joanne Hartstone), Weaver (Jimmy Lyons), Landry (David Daradan) and Sanders (Anton Schrama), learn that their enterprise is on the brink of disaster and then decide to pull an all-nighter to save the day.

Parks has dissected capitalism mercilessly with all the twists and nuances of a grand psychological study. We witness “normal” humans interacting in the abnormal confines of a few offices on a certain floor, bound together as team mates and competitors, while striving to survive amid incoming threats and opportunities from other floors and the CEO.

Almost every scenes lands some punchlines, further punctuated by occasional quips with philosophical depth. Symbolism is confusion for the greater good, utters Owens while showing off a portrait she’d painted, simultaneously describing the daily act of obfuscation of financial data carried out in corporate land for “the greater good” or at least for personal survival.

And this is where Enterprise gets it so right. Within the toxic cultures developed in most pressure-cooker environments in enterprises the world over, workers have learned they need to protect their own patch of turf and that sometimes means they fight for the common good of the company while at other times those interests are opposed. Our protagonists, having decided to go all out to “save the day” utter a blend of war cries chanting for their company’s good fortune and the valet parking they will all receive when they are hailed as heroes for their efforts.

Enterprise is a fascinating and entertaining play that will leave you in no doubt as to how an enterprise that appears highly functioning on the outside is most likely being held together by spin, corporate and personal greed, and luck.

With solid performances by the cast, clever and elegant design (that adaptable fluorescent framework was a master stroke), and sassy writing by Parks, Enterprise is a Fringe production that respects its audience and over delivers with production values worthy of the Dunstan Playhouse and beyond.