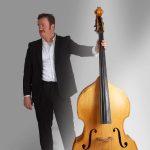 As a solo show, Double Bass at the Bakehouse Theatre is a triumph in pace and orchestration.

Adelaide actor and double-bass player Eddie Morrison, fresh from his run in the State Theatre Company of South Australia’s End of the Rainbow, holds our attention for 75 minutes of eloquently delivered monologue as he reflects on his plight as a double bass player.

German playwright, Patrick Süskind, draws us into a complex world of philosophy, reflection, frustration, rage, and musical criticism, as our player opines between rehearsal and performance.

On a simple set, making use of the Bakehouse Studio’s black, chalkboard walls, stands a double bass. The rest of the space is occupied by our double player as he teases apart his life choices, especially his decision to play double bass, using chalk, some musical demonstrations, and plenty of alcohol.

“You really aren’t born to be a bass-player. You get there by all kinds of detours and accidents and disappointments,” he muses, as he confesses and chides himself for only ever being able to play the instrument to a level best described as pedestrian; just sound enough to ensure ongoing tenure in the state orchestra.

Intriguingly, this heartfelt piece which is addressed to an “other”, is delivered by Eddie Morrison as he holds a gaze over the heads of the audience. This uncomfortable disconnection in such an intimate piece of theatre takes some adjusting to but could be director, Lisa Harper Campbell’s, homage to Wagner’s penchant for composing unplayable music.

Translator, Michael Hofmann, has maintained that European sense of deep, complex thought and care about finer details in areas of passion. If you enjoy being immersed in manic, philosophically-flavoured self-reflection, you will find Double Bass very pleasing, along with its extra helpings of facts and insights about the instrument and many classical composers.

The time flies in this enjoyable production providing patrons with some time away from their own lives where they might have equally settled into a mundane but satisfying-enough life with an occupation they can’t abide but have resigned themselves to endure.