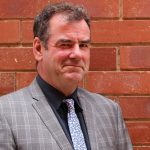 I’ve been moving in stand up comedy circles for the past year and I’ve had my fill of middle-aged guys and their focus on their genitalia, so I was despairing at the thought of reviewing a play about a privileged white guy romping his way through women like a glutton at a smorgasbord.

I should have had more respect for the wise heads and wild hearts behind the University of Adelaide Theatre Guild because this production is a joyous and adorably cringeworthy farce.

Patrick Marber’s Don Juan is situated in Soho but still captures the centuries-old journey of debauchery, discovery, and judgement that Don Juans have endured in all their various manifestations for hundreds of years.

In this play, we witness the sometimes cold, sometimes nonchalant way in which DJ dismisses the trail of destruction he leaves behind after each “conquest” of a new woman (getting his rocks off leads to an avalanche of hurt) and the audience is clearly not on his side.

But what intrigued this reviewer the most was the enthralling dynamic between DJ and his man servant, Stan.

The audience was drawn to Stan because in this Bottom-like character, we saw a loveable person compromised and enslaved to DJ due to the latter’s power to charm and sweet talk in the same way a flame entices the moth.

As an audience, we feel for Stan and are agog as his relationship is pushed and tested and broken and restored by the master manipulator himself, Don Juan.

For anybody who has ever worked under a boss or colleague or family member who was narcissistic, jealous, greedy, and/or dangerously obsessed by their own needs, you will love this play and love the epitaph; the world is better off without him.

Good riddance to all such humans who use others as fodder for their selfish delights.

Glad tidings to the University of Adelaide Theatre Guild for staging this play when its premise goes against contemporary norms in the wake of the #UsToo movement.

There are issues here, bigger than the hunt for “tail”, and the flawed logic espoused by the obnoxious DJ (the world is a broken place so it is okay that I am too) is stripped bare for all to spurn.

While there was some unevenness in the performance, any dips or flaws were mightily forgivable when considered against the whole.

The only cautionary tale, apart from the story itself, is that of PR people ramping up the claims of shocking behaviour on stage in posters and promotional material. Yes, there were a few moments that drew gasps from the audience but some moments like the lure of DJ to bed by his three vixens were timid and polite rather than explicit and worthy of the title, debauchery.

If you prepare yourself for a romp with laughs, cringes, and a salutary ending, you will be well prepared for Don Juan In Soho.